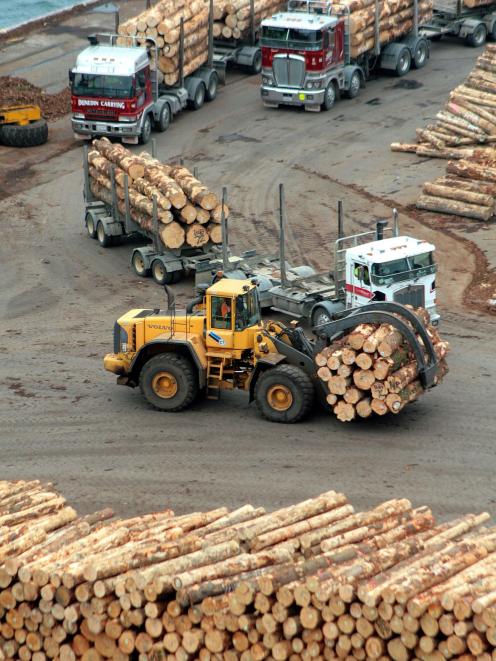 Harvesting crews and small wood lot owners who are fully exposed to the current movement in the log price are wearing the brunt of the drop. Initial estimates show around 200 firms potentially impacted.

With the mountain of logs in China now estimated at more than 4million cu m, or more than two months' supply, demand into China has virtually dried up, with prices falling by about 20% since early July.

This translates to a $37 ($US25) per cu m drop in the CFR price (cost and freight), now sitting at around $157 ($US105) per cu m. Market commentators say while part of it is due to the normal slowdown during the warmer months, the new China-US tariff regime has affected buying confidence, though the main culprit is oversupply from New Zealand and South America.

The Chinese market represents almost 80% of New Zealand's export timber, which accounts for about half the logs felled in New Zealand. So the ''correction'' could potentially shave hundreds of millions off wood export receipts.

''This drop in CFR prices and resulting drop in New Zealand AWG (at wharf gate) prices would have a significant impact on log supply.''

He said the expectation was that CFR prices would start moving upward from September as activity increases in China as their temperatures cool. However, forestry consultant Allan Laurie said it's the fastest drop he's experienced in the 16 years he's been involved in the China trade.

''Such a quick drop has massive impacts, not the least being a dramatic slowdown in the harvest rate in New Zealand.''

He also noted a ''significant increase in supply of lumber from Europe'' and ''major New Zealand suppliers have ignored the market intel since late 2018 trying to drive up prices when it needed to go down.'' 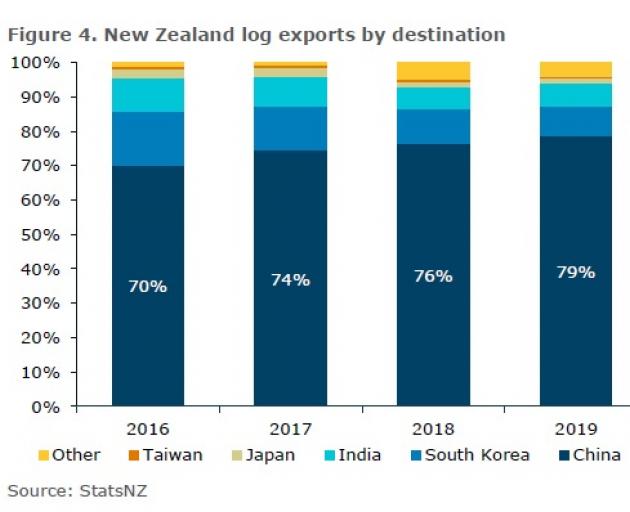 He said that accordingly, harvest in New Zealand, has been significantly in excess of the market ability to take the extra volume.

ANZ agricultural economist Susan Kilsby said oversupply was the clear driver of lower prices, with an extra 1.35million cu m of logs exported from New Zealand during the first five months of 2019 alone, equivalent to about one additional month's worth of supply.

''New Zealand has steadily increased its share of the China log market in recent years to become the largest supplier of logs to China. In 2018 it held 27% of the market, while Russia decreased its market share to 16%.

She said it could take six months for a marked lift in price, as existing stocks needed to be worked through and buyer confidence to rebuild. This could have implications for capital investment into forestry.

''The appetite for further investment in forestry ventures may wane for those ventures [in] which the income streams rely on harvesting logs.''

One sheep and beef farmer with a share in an 80 ha forestry block of pine, Douglas fir and macrocarpa in West Otago said he was reviewing his options.

''We are due to harvest in 2021 but with the market already overheated and the billion tree programme getting into gear, it seems we'll be running into a wall of timber.