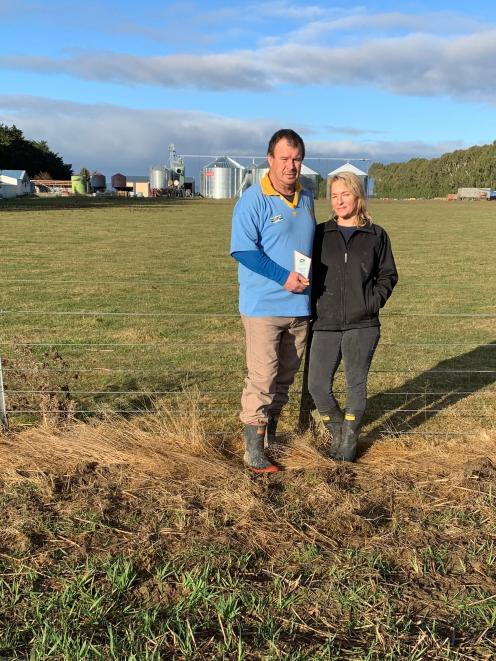 Grain Grower of the Year award winners Morgan and Karen Horrell inspect a winter wheat crop on their farm in Wendonside. PHOTO: SUPPLIED
Southern growers featured at the Federated Farmers Arable Industry Awards in Christchurch earlier this month. Shawn McAvinue talks to them about their mixed cropping operations.

The Horrell family has been cropping for five generations in Northern Southland and the future is looking bright.

Grain Grower of the Year winner Morgan Horrell said his great-great-grandfather started the farm in the 1860s.

Historically, more small seeds were grown in the district but much of the production moved north when Canterbury growers had an irrigation scheme approved in the 1950s.

Seed growing was returning to the South because Canterbury had lost cropping ground as the dairy farming sector expanded over the past 20 years.

Global demand for small seeds was growing and more land in Northern Southland was being used to produce it.

"We are starting to get some of it back now."

Crops grew on the farm all year round.

"We don’t fallow anything."

Up to 6000 replacement ewe lambs of clients grazed on green feed crops in winter.

About 2000 lambs grazed on the farm for the rest of the year.

The farm operation was designed to be environmentally sustainable.

A "no-till" farming system had been used for the past 20 years.

The agricultural technique, also known as direct drilling, allowed farmers to grow crops by disturbing the soil less than a traditional cultivation system.

"The soil health is a hell of a lot better and the worm population is huge."

Another advantage of the technique was retaining soil moisture, to help battle dry conditions.

As a Wendonside Catchment Group member, he monitored nitrate levels in aquifers in the district.

"We are really mindful of the fertiliser we put on is all used up through our arable or brassica crops."

In Southland, the time to plant crops in autumn was short.

"As soon as we finishing harvesting we are seeding in the autumn ... if you don’t get your seed in the ground before the end of April, you can run into issues."

The no-till system gave him the ability to put a lot of seeds in the ground quickly.

Winning the award was "a bit of a surprise".

"There’s a lot of good grain growers around."

"Their wheat yields and quality would be in the top 10% of Southland growers annually with a medium input operation."