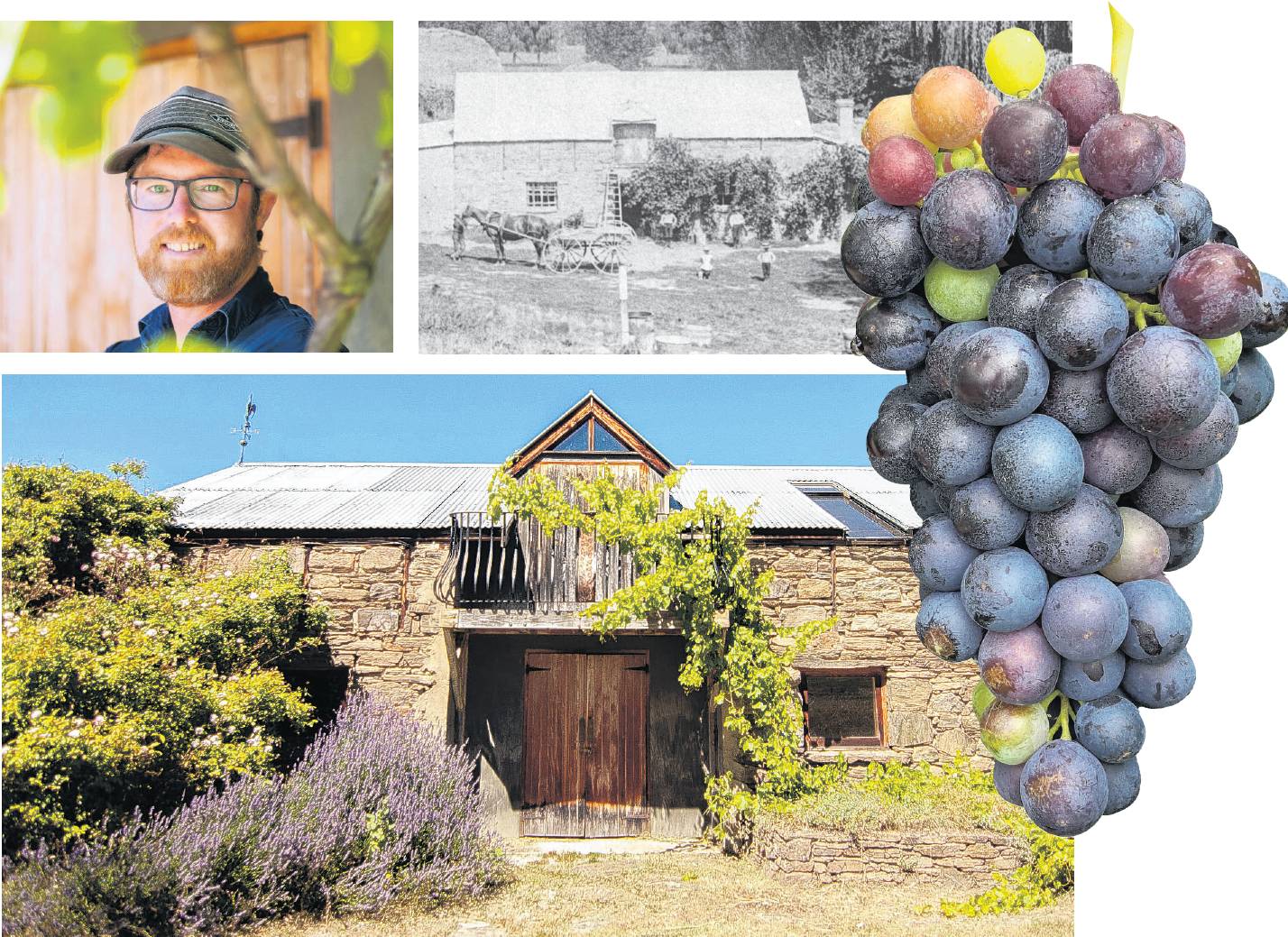 Monte Christo viticulturist Sam Wood (pictured) says Trollinger grapes have been found growing in Monte Christo Winery, in Clyde, over the balcony of the original stone winery. It is not known how long they have been there, but they can also be seen in the historic photo. PHOTOS: SAM WOOD/SHANNON THOMSON
More than 150 years after Frenchman Jean Desire Feraud first made his mark on Central Otago, his legacy lives on.

The goldminer turned winemaker is widely credited as the original commercial winegrower in Central Otago. He planted more than 1200 vines in the Alexandra Basin at his Clyde winery, Monte Christo.

When viticulturalist Sam Wood recently discovered an unidentified grapevine at the original site of Feraud’s winery — the present-day Monte Christo Winery — he turned to the Bragato Research Institute, a specialist research centre for the New Zealand wine industry, for DNA testing.

‘‘We weren’t sure what it was, and I was talking to someone in the industry and they suggested we get it DNA tested,’’ Mr Wood said.

The results identified the grapes as trollinger, a rare variety grown in northern Italy and Germany and believed to be brought here by Mr Feraud from Australia.

‘‘It was surprising. We were hoping it was going to be pinot noir or something. I don’t know if there’s any other vines in New Zealand.’’

While trollinger was grown for wine in Europe, it was more of a table grape, with bunches three to four times larger than wine grapes, Mr Wood said.

‘‘It’s huge — about three or four times the size of pinot noir bunches.’’ ‘‘Wine grapes are generally smaller berries, lots of seeds, lots of fruit, but are not as elegant as table grapes — they’re totally different.’’

The discovery had been a learning curve, he said.

‘‘We are learning about them as we go — I don’t know of any other places in New Zealand that have them.

‘‘It is very vigorous, grows quickly and is very care free — I’ve pruned it once in the last winter, it doesn’t seem to need too much work.

Mr Wood had been in the viticulture industry for 15 years and was helping Monte Christo’s new owners restore the winery to its former glory.

They planned to revert the existing stone building to its original form to be used as a cellar door.

Work was expected to begin later this year, with the cellar door opening in October next year with a 2023 vintage pinot noir and chardonnay.

Mr Wood had been searching old newspapers for information on Mr Feraud and the winery, to assist with the restoration and to build a connection with the region’s winemaking heritage.

‘‘Feraud was the first to commercially release a wine

— but not necessarily the first to plant vines,’’ Mr Wood said.

‘‘I think Alexandra and Clyde were the first region in Otago to grow vines.’’

The discovery of trollinger at the site would provide visitors with a tangible link to the winery’s origins.

‘‘I took cuttings and have propagated them and we will have them around [Monte Christo] as a nod to the past and to honour the history,’’ Mr Wood said.

‘‘It’s pretty exciting, to be honest — it’s also my first role as a viticulturist and to be able to involved from day one is pretty special.’’\