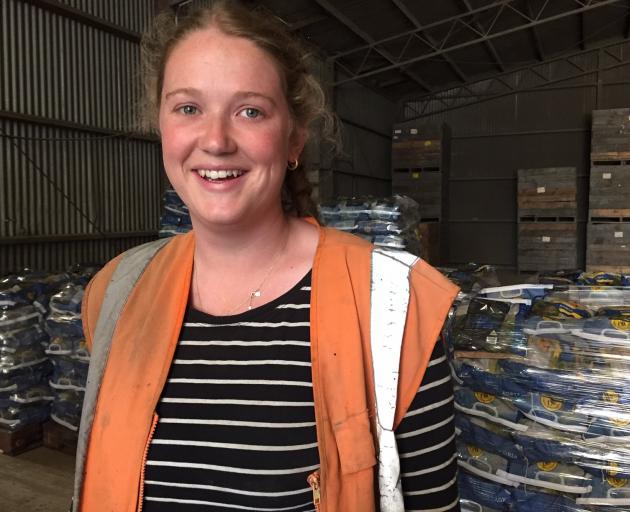 Kowhai Bush Farms operations manager Sarah Mosley in the packing shed. PHOTO: MARY-JO TOHILL
Sarah Mosley’s earliest memories of growing up in South Otago are being out in the potato paddocks with her dad.

"And hand-picking — that’s how we used to do it," she recalled.

The girl has grown up and so has the operation at Kowhai Bush Farms at Stirling. They harvest by machine now, to keep up with an insatiable demand for spuds.

The company grows four blocks including Inch Clutha, Milton, Lovells Flat, and, for the first time this year, at Edendale in Southland.

"Being roped in to help with the irrigation or sitting on the tractor; I did that from an early age, starting work in the packing shed at 8 or 9 years old and pretty much shadowing Dad."

She made the move from the hospitality industry back to the potato fields of home about 18 months ago, at the same time as Hamish was reassessing his career as a pilot.

"My Mum [Irene Mosley] always said that out of the two of us, I’d be the most likely to come back home [and work the potato farm], but in fact both of us wanted to come back.

"The plan was my brother was going to take over. He’s a pilot and flies ATRs, and he wanted to scale back and spend half his time piloting and half of his time down here."

However, they’ve split the duties into their areas of expertise with Hamish running the harvest and Sarah as more of the production-operations manager.

Covid-19 had some bearing on the situation, in that both their sectors were affected by the lockdowns and economic downturn, but it was more of a homecoming situation for both of them.

She then attended a hospitality school in Switzerland, Hotel Institute of Montreux. Her placement involved working for charitable trust United Through Sports in St Lucia in the Caribbean, where she spent for four seasons.

She then finished her degree in business management at the International School of Business in Sydney. On her return New Zealand, she became the operations manager at the Bay Plaza Hotel in Wellington.

Returning home to help run the family farm had not been without its stresses.

It was one thing working in the packing shed as a teenager in the school holidays as the boss’s daughter. It was quite another taking charge of it.

"That’s been a bit of an adjustment, but we’ve got there."

It had been a test of resilience so far, what with the panic-buying prior to lockdown that all but cleaned out their stocks, which was hard on the heels of the February flood that destroyed part of the Inch Clutha crop.

"Seeing your potatoes rot and having to be chucked out was soul-destroying. After all that work, it was just a little bit crushing.’

"I didn’t think it would affect me but it did. You have to laugh, otherwise you’d cry."

Miss Mosley admitted that she sometimes dreamed of potatoes.

"I’m a sleep walker. I tend to do it when I’m stressed.

"Storage is a balancing act. I’m always walking around the sheds trying to make room.

"One night I had this dream that I was re-organising my wardrobe to fit in more potatoes. I woke up to see that I had in fact reorganised my wardrobe. It had happened in my sleep."

She had been working at a Mexican restaurant in Balclutha at the weekends to keep her hand in hospitality, but may scale back on that as things got busier on the farm.

"I really enjoy the people side of hospitality but I like the practical side of potato-growing, and that fact the no two days are the same.

"It keeps you on your toes, and you’ve got to be flexible."

She is also studying for a Primary ITO level 4 qualification in level 4 post-harvest production, which she hopes to complete within two years.

Miss Mosley is in a new relationship with a local dairy farmer.

"I’m feeling like I’m settling down. I’ve bought a house in Balclutha, so it’s happy days."