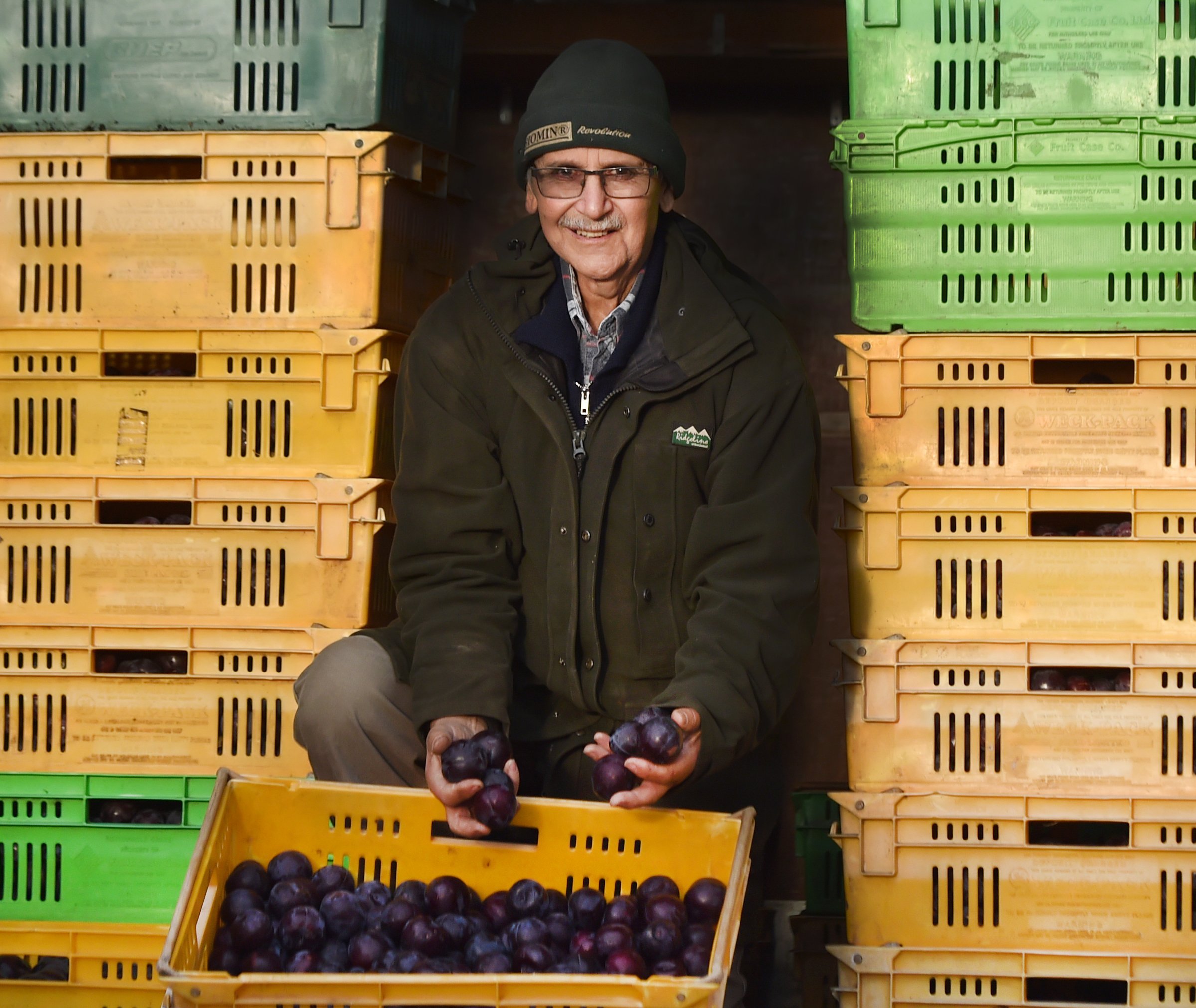 Wes Reichel has attended his last Otago Farmers Market as a vendor. PHOTO: PETER MCINTOSH
Wes Reichel will be entitled to a sleep-in this weekend.

For more than 18 years, Mr Reichel (73) has left his bed at 3.30am on a Saturday, had a coffee and climbed into his produce-laden vehicle and headed to the Otago Farmers Market in Dunedin.

But this past Saturday marked the end of an era, as the Teviot Valley orchardist retired from the market.

While he would continue to grow fruit and vegetables at Te Mahanga Orchard, south of Ettrick, which has been in his family since 1919, he rued he was ‘‘getting too bloody old’’ to continue travelling to Dunedin.

Leaving home at 4am, and returning again at 4.30pm, it was not so bad over the summer months but it ‘‘gets a bit hard going this time of year’’.

He used to also attend a market in Invercargill on the Sunday but that was at the later start time of 5.30am — ‘‘there’s some mad people about,’’ he chuckled.

It was Mr Reichel’s grandfather who first planted an orchard which his father took over through the war years.

Wes Reichel took it over in 1971. The only other thing he was interested in doing, as a career, was getting into the MetService as he had a long-standing interest in the weather.

The name Te Mahanga referred to a tiny settlement in the North Island and the property was named before the Reichel family owned the land.

It was a small property and it became difficult, as a small grower, to supply the local market which only wanted ‘‘big players’’ and large, guaranteed quantities, he said.

It was a relatively busy market initially but, after about four or five years, it ‘‘really went ahead’’, Mr Reichel recalled.

One of the factors of its success had been the good balance of goods and produce offered. It had not been ‘‘top heavy’’ with any one thing.

He had many regular customers and he enjoyed talking with people. Often people wanted the older varieties of fruit that they could not get at the supermarket, and they were also keen to know about their produce and how it was grown.

Te Mahanga used to have a roadside stall but that proved problematic. Sometimes it was busy, other times it was not and, when he tried self-help, some people were ‘‘a wee bit too self-help’’, he said.

It was a lot easier to take it to the market while he also had supplied fruit for processing to Barker’s, of Geraldine, for about 40 years.

During the Covid-19 lockdown last year, Mr Reichel said he dumped thousands of dollars worth of fruit.

However, there was a silver lining; he has been growing garlic for about 20 years and he had a reasonable amount when the pandemic hit. He managed to sell out online in a day.

He has doubled the amount of garlic at his orchard this year. There were not many growing the plant.

‘‘It’s easy to grow but you’ve got to know what you’re doing. You can stuff it up very quickly if you don’t do the right things at the right time,’’ he said.

Mr Reichel had seen many smaller orchardists disappear in the Teviot Valley over the years. It was ‘‘hard going’’ but interesting.

There were not the young ones entering the industry, as they preferred to work five days a week. The orchard was often seven days a week.

The past season was probably the worst he had seen in his 50 years; there was a light fruit crop due to frost in spring, a ‘‘massive’’ hail storm on Christmas Day and then heavy rain in early January, all doing lots of damage.

Mr Reichel would keep producing fruit and vegetables ‘‘for as long as I can do it’’.