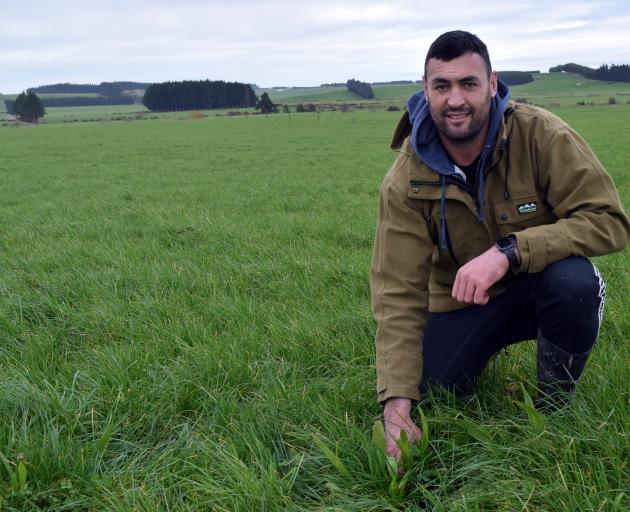 Dairy farmer Blake Korteweg inspects plantain crop growing in a paddock where he sharemilks in central Southland. PHOTO: SHAWN MCAVINUE
Expect showers in the milking shed if the cows have been eating plantain, a central Southland sharemilker warns.

Blake Korteweg is constantly seeking ways to improve his sharemilking operation, in which he runs about 500 cows on an 175ha platform at Hedgehope.

He added Ecotain environmental plantain seeds to the his regrassing programme about four years ago, introducing it to a mix of three types of clover and a perennial ryegrass.

A diet including plantain made cows urinate more often.

The first time the cows visited the milking shed after eating plantain, everyone noticed the herd was urinating much more often.

‘‘You’ve got to keep your head up and your eyes open a bit more.’’

The cows urinating more often reduces nitrate leaching by spreading any surplus nitrogen in the urine across a paddock, rather than saturating a spot.

Plantain also increased nitrogen uptake from the soil by plants and reduced the nitrification rate in the soil.

The herb featured in about 80ha of the platform, including some ‘‘stitched in’’ to paddocks in summer.

A plan for later this year was to spread a mix of urea, plantain and clover on paddocks containing thinner pasture cover.

‘‘It’s like a weed — it grows easily and is easy to establish.’’

In dry conditions, plantain stayed around longer than a general ryegrass.

The cows enjoyed eating plantain when it was short but it became bitter when it was longer, he said.

Another challenge was to determine how much plantain it took to achieve positive environmental outcomes.

The yield and composition of the milk his cows were producing had remained the same since introducing plantain.

‘‘We haven’t seen any negatives.’’

He was the only farmer he knew growing plantain in their system ‘‘year in, year out’’ but had confidence in it because of the millions of dollars being invested to research it.

DairyNZ forecasted a potential reduction of 15,000 tonnes per year of nitrate-nitrogen leached on 4200 New Zealand dairy farms in nitrogen-sensitive catchments per year by 2035 — a 37% reduction from current levels.

The programme would use PGG Wrightson Seeds’ Ecotain environmental plantain, because it had already proven effectiveness, Dr Mackle said.

The work aimed to give farmers confidence to invest in growing plantain as an animal feed on their farms throughout New Zealand, Dr Mackle said.

The Government was giving $8.98million to the programme over seven years.

The programme would include large-scale farm systems experiments at Lincoln and Massey Universities, which would measure nitrate leaching under plantain pasture compared with perennial ryegrass, to confirm reductions in leaching.

The trials would also confirm the proportion of plantain required in the pasture to achieve nitrogen loss reductions, determine the effects of different soil and climate conditions, and capture any changes in farm profit between the systems.