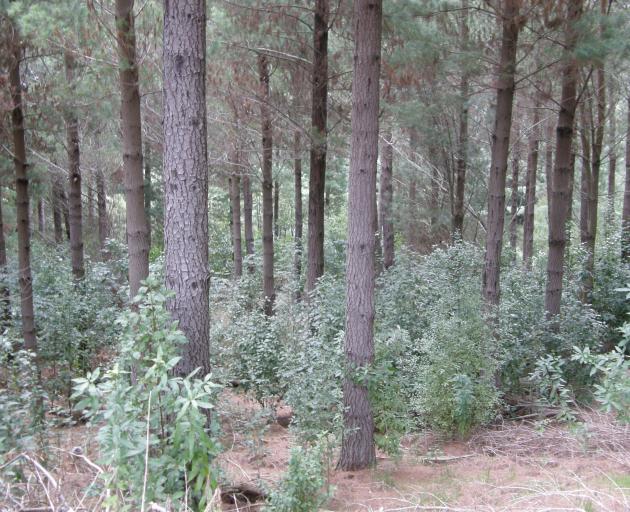 Public feedback is being sought until March 14.

"Radiata pine provides a fast growing solution as a short and medium term carbon sink on land not suitable for harvesting, at a cost far less than establishing native forests from scratch on bare land," Mr Bennett said.

As a fast-growing tree, pine trees absorbed carbon rapidly over a 30 to 50-year period and pine plantations could grow and eventually decline to provide a canopy to support the establishment of native forests.

"Native trees can take hundreds of years until they get to the level of carbon sink required," Mr Bennett said.

"But growing radiata pine in the right place, at the right time provides multiple benefits. It provides robust money to our GDP, compared to other products and works well alongside other farming practices.

"As North Canterbury farmers are increasingly finding, in the right environment sheep, beef and forestry will do better per hectare than just sheep and beef."

University of Canterbury forestry professor Euan Mason said there was a misconception that forest carbon storage was "impermanent".

"What matters is the total area of New Zealand in forest, not whether or not any particular forest stand blows down, burns or is harvested.

"If we commit to increasing the total national area of forest and to ensuring that the very small areas that blow or burn down, or those areas that may be harvested, will be re-established, we can enlarge a very stable, permanent carbon store in forests."

While there was a perception of an increased risk of forest fires due to climate change, Prof Mason said this appeared to be based on experiences across the Tasman.

"New Zealand’s forests have long been far more likely to blow down than burn down, and the frequency of forest fires has not yet been shown to have increased in New Zealand."

Rather than relying on native plantings, Prof Mason advocated taking advantage of the more "rapid sequestration rates of exotics to fill gaps in our carbon accounts".

As the exotic trees matured, plantations could be gradually transitioned to native forest over several decades.

However, he warned establishing native forestry was slow and could be expensive.

Mr Bennett should make himself available to the Waitaki district council who are approaching this issue in a very unscientific way.