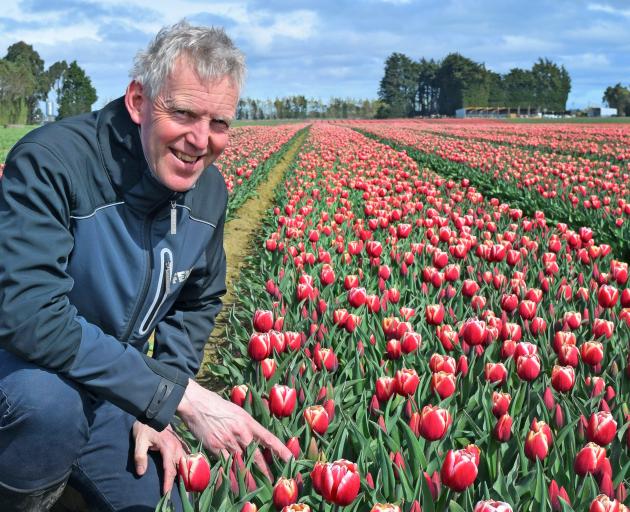 Triflor NZ operational manager Rudi Verplancke inspects the first flowers to bloom on the farm in Edendale. PHOTO: SHAWN MCAVINUE
An annual tour of the tulip fields will wilt this year if Southland remains in Alert Level 2, an event organiser says.

Tulip grower Triflor NZ was set to open its colourful fields in Edendale to thousands of people on Labour Day.

However, tour co-ordinator Jean Kirby, of Seaward Downs, said the event would only proceed if the South was in Level 1.

A final decision would be made on October 18, Mrs Kirby said.

She believed chances of the event going ahead were "slim".

The open day was run by Edendale Presbyterian Church, raising funds for the parish, the Wyndham Pioneer Lions Club and the Edendale Scout Group.

If the event was cancelled, the committee would find a way to sell tulip bulbs online this year.

People would still be able to look at the "vibrant and stunning" tulip fields from the road.

"Covid cannot cancel the tulips flowering — regardless of what level we are in, the paddocks are going to be beautiful."

The crop was looking "really good" this season.

Tulip flowers would be chopped off "by a big lawnmower" from later this month to mid-November.

The bulb harvest was weather dependent but usually happened in mid-January.

About 75% of the bulbs were exported to North America — the rest went to Finland, the Netherlands, Norway, Poland and Russia.

Consequently, new markets in Eastern Europe were explored to sell the surplus bulbs.

The new clients were returning to buy more bulbs this year.

"Covid, in that regard, has been good to us."

More sheds to dry bulbs were being built on the Edendale site.

The concrete was being poured this year and the new sheds would be operational by December next year, increasing drying capacity by about 15%.

The company had been growing tulips in the district for about 30 years, he said.

This time of year, it was common to see middle-aged motorists scoping out the farm, hoping to spot some early blooms, he said