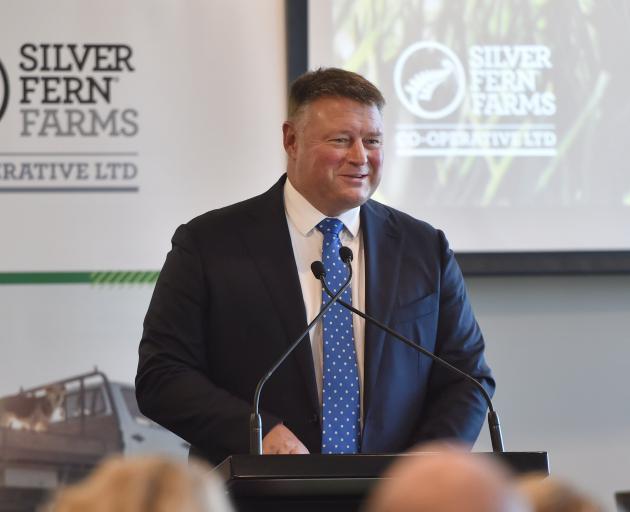 Silver Fern Farms Co-operative chairman Rob Hewett addresses the co-operative’s annual meeting in Dunedin yesterday. PHOTO: GREGOR RICHARDSON
"Farming has never been more challenging yet, in my view, the future has never looked as bright — if we get it right."

In March, Silver Fern Farms Ltd announced an after-tax net profit of $103.8 million for the 2021 financial year, up from $65.4 million the previous year. That meant the co-operative increased its after-tax profit from $31.6 million to $51.5 million.

In his address, Mr Hewett said the unprecedented times being experienced were going to extend well beyond 2022.

The co-operative was very grateful for the performance of the operating company in steering this ship through the very choppy waters we have experienced in 2021 and continue to experience now".

A record performance delivered year-on-year despite domestic and global tensions, along with climatic conditions, was worth reflecting on, he said.

Silver Fern Farms’ performance in recent years had offered a bright light" and he believed more farms would have moved to carbon farming if it had not been for its performance.

There had now been five successive years of dividend payments and/or patronage rewards to shareholders.

The 2022 season was looking to be one of the longer ones in terms of volumes of stock coming from later in the season.

The primary sector was experiencing challenges around access to skilled labour and Silver Fern Farms had an average of 550 staff short across its plants, which impacted its ability to process livestock.

The solution was to continue to focus on the company being an employer of choice", Mr Hewett said.

Inflation and farmer confidence were also priorities for the board in 2022. Farmers were feeling the impact of change and disruption inside the farm gate, he said.

Chief executive Simon Limmer said the company’s ability to navigate the short term and generate value and continue to invest in the long term had been the most satisfying component of the year for him.

The disruption being experienced was a reality of our world today" but the underlying demand for quality protein was very strong and he believed it would continue to be.

Once China got back to normal, after the latest Covid-19 outbreak, he expected that market to continue to build.

He felt very optimistic about the future, but said he did feel lessons were coming from the market in terms of expectations from consumers.

It was very important for Silver Fern Farms to both understand and respond to them. The business needed to continue to adapt and change.

West Otago farmer and former co-operative director Fiona Hancox asked how the business would be affected if the Ukraine-Russia conflict continued and if any sanctions were to involve China.

Mr Limmer said it was the question on everyone’s lips"; China was the company’s biggest growth and value market, but it was about 35% of total exports.

If the company was performing well, then options were good across a range of different markets including the United States, Japan, Europe, United Kingdom, Middle East and South Korea.

We are agile and strategic. Both of those things go hand in hand," he said.

It had taken a conservative view in terms of allocation into the Chinese market where food service was heavily down.