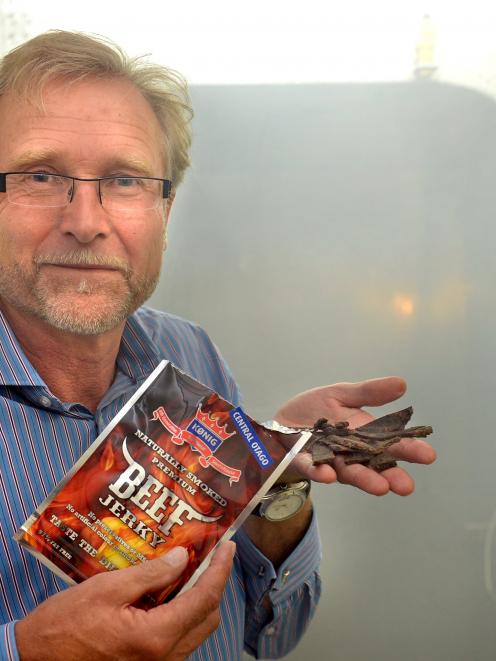 Bjorn Oscar Sollie with his Central Otago flavoured beef jerky in front of the smoke-house, at his Green Island factory in 2014.PHOTO: STEPHEN JAQUIERY.
Three decades of entrepreneurial business in Dunedin has ended badly for identity Bjorn Oscar Sollie and his specialist Konig Gourmet Foods.

However, the company debt was understood to much more and it appears unsecured creditors will be out of pocket, circumstances Mr Oscar Sollie said he was at pains to avoid, or at least soften the blow.

When spoken to a month ago he said he hoped to clear the debt. He declined to comment when contacted after the High Court hearing yesterday, which he did not attend.

By 2014, Konig was exporting about 12 containers, or 122 tonnes of beef product a year. He was an Otago business awards finalist and his company's products supplied to diverse markets ranging from embassies to oil rigs.

Mr Oscar Sollie was 100% shareholder of Konig Gourmet Foods, which ceased trading in April last year, and he had since been attempting to sell the business.

In pleading Mr Oscar Sollie's case yesterday for a month-long adjournment, before Associate Judge Kenneth Johnston in the High Court of Dunedin yesterday, Dunedin barrister Gordon Paine said his client "had lost his home, business and has cancer".

He was pleading that Mr Oscar Sollie be given a month's leave to sell the Green Island building and its specialist equipment "to one of three interested parties," so as to enable "some payment" to be made to all creditors.

However, legal counsel for Wrist Ship Supply said no evidence had been supplied about the potential buyers, and his instructions were therefore to persevere with the application to have Konig Gourmet placed in liquidation.

Mr Paine said if the business could be sold, as opposed to a "forced sale" from liquidation, "something would be better than nothing" for creditors.

Judge Johnston noted that while the request posed no threat to creditors, any time passing "would make it worse", so it was best dealt with by liquidators now, and he therefore decided to appoint firm Grant Thornton.

"It might be a relief for him [Mr Oscar Sollie] not to deal with this," Judge Johnston said of his circumstances.

Mr Paine noted the bank, which would be the first secured creditor in line and "there would be no money left after the bank takes it", meaning neither Wrist nor other creditors were likely to get any payments.