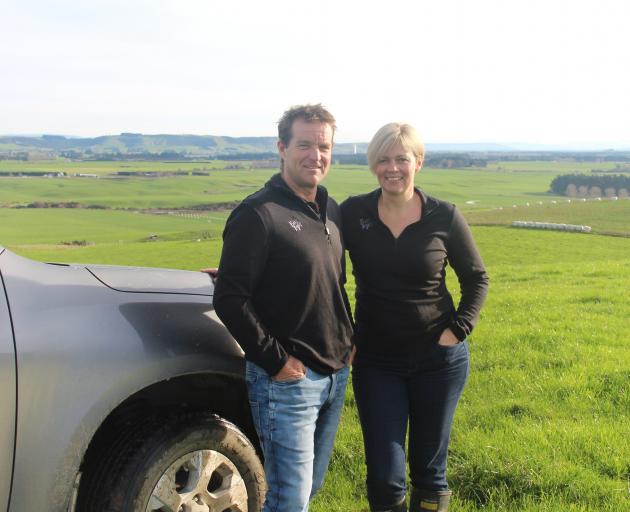 The couple moved south from the North Island 14 years ago and bought a drystock farm after deciding they liked the region.

After a few years, they bought a neighbouring property to convert to dairy but when the dairy market started experiencing volatility, they decided they needed to spread their risk to cover themselves during those times.

They are now milking 450 cows near Winton and the business is split between dairy and beef operations.

With that desire to have that point of difference, they found what they were looking for with Hawke's Bay-based producer group First Light, Mr Bodle said.

The company was expanding its farmer numbers to keep up with both domestic and international demand.

It was looking for new farmers/finishers to buy wagyu-cross calves from its upcoming spring weaner release.

The company knew the biggest benefits to farmers were a short, transparent supply chain and income stability, Mr Crowther said.

Payments were known upfront, based on a set price per kilogram, modelled on established market returns. Price was set 12 months ahead.

"This year, on average, our shareholders get more than $7/kg. It's about 20% over commodity on average, so that's breaking into a new bracket, which has been our aim for the last five years.

"We know many farmers are fed up with the status quo of commodity beef. They want to be rewarded for individual quality and performance, not to be averaged and reliant on a volatile commodity market, so on that basis, we pay on quality measured by marbling - so we reward effort to produce a top-quality animal," he said.

First Light's current supply base was spread from Northland to Southland with particularly strong growth in the South Island.

Mr Bodle said the key to the First Light structure was that fixed pricing system and knowing pricing 12 months in advance.

It had also given the couple a good lifestyle change as they were not committed to milking cows "day in and day out".

Recently, they visited the United States on a marketing trip and it gave them confidence in the future.

The marketing team had done a "fantastic" job to establish markets, as it was very difficult to get into stores, Mr Bodle said.

In Texas, shoppers were offered meat balls with only salt added, so they could taste just the flavour of the meat. Used to seasonings to provide flavour, they were "blown away" by the taste of the First Light meat.

Being grass-fed and antibiotic-free were points of difference as even if US beef was classed as grass-fed, often that grass was fed to stock with a pitchfork.

The biggest thing he got out of the trip was seeing how every part of the supply chain needed to understand the others.

It was about targeting the right people to come on board with the programme and farmers needed to take a real interest in that whole supply chain, he said.

The New Zealand story resonated with consumers; as soon as they learned they were from New Zealand or heard their accent, "they just love it", he said.

Mr Bodle said Southland was a great area to farm but it was also all about the people and community.

Their two daughters, Alex and Sally, were also a big part of the operation. Alex was working on a sheep, beef and deer farm before doing an artificial breeding run, while Sally was studying nutrition in Auckland but spent the summer in a crutching gang, crutching 1100 lambs a day.