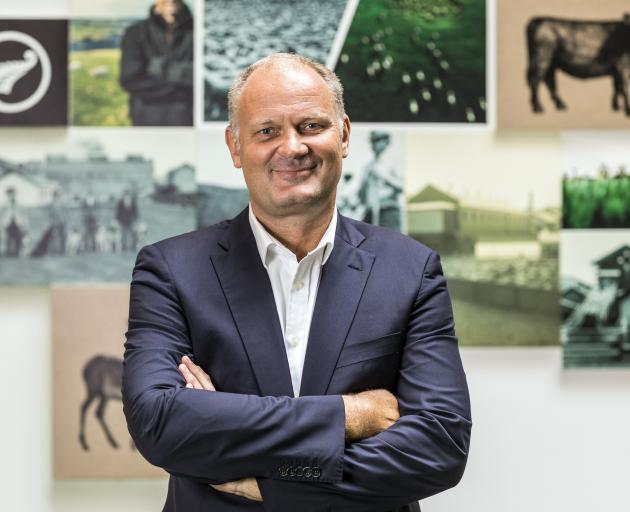 Addressing a supplier roadshow held online this week , Mr Limmer said 2021 profit was tracking ahead of budget and stakeholders were saying it was as good as the company had performed in the past 10 years — "and probably ever".

Silver Fern Farms Ltd co-chairman Rob Hewett said the business was performing "exceptionally well", which was reflected in its annual result announced in March — a $65.4million after-tax net profit for the year ending December 31, 2020, its second-strongest result of the past decade.

The performance was a callout to the whole business, during times of uncertainty, and particularly the supply chain team whose performance he described as "absolutely exceptional".

While the market demand offshore for New Zealand grass-fed red meat was strong, the challenge was "getting it there", Mr Hewett said.

Mr Limmer said that issue was not going away and shipping reliability was running about 20% of what it was 18 months ago, when that was 90%.

During that time, that global disruption to the supply chain had been a real challenge for the company; whether it was availability of containers to put product in, ships to load containers on or certainty about where a ship was heading, when it would arrive and when it would be unloaded.

The company had had to adapt and its cool stores had been full.

The other acute impact in the coming year would be the cost; about a 50% increase in shipping rates had been seen over the past six months.

The good news was that the joint shipping venture Kotahi, established by Fonterra and Silver Fern Farms about 10 years ago, had stood it in good stead.

Another significant issue was labour, and that was forcing the company to think differently about how it operated plants.

Investing in more automation was not an "overnight fix", Mr Limmer said.

Mr Hewett said there were also big issues inside the farm gate and in New Zealand, dealing with legislative requirements "coming at us like a freight train".

Silver Fern Farms was engaged in that discussion. Fundamentally, the company’s job was to bring farmers as many consumer-focused competitive offers that it possibly could to mitigate potential land-use changes and it was committed to doing that, he said.

New Zealand had become isolated in the past few months and "we have to get back out there and start rebuilding relationships", he said.

The future was still looking to be punctuated with a "big black Covid cloud around the world".

Silver Fern Farms had to continue to work hard to ensure the wellbeing of its people and productivity of its plants.

He had a real sense of confidence as the company understood consumers more and adapted the business to suit those requirements.

Group marketing and innovation manager Nicola Johnston said the future was full of risks and challenges but potentially even greater opportunities for the company and its suppliers.

Outlining trends, she spoke about the rise of the Gen Z demographic who were born entirely in the internet age.

Climate change topped their priority list, they had a huge desire for transformational change and they wanted companies and brands to "stand for something".

Conscious consumption would reach new heights and openings were starting to be seen in regenerative agriculture. Technology was going to augment people’s bodies, work and home lives, and data was "the new oil".

The food industry would soon look nothing like its former self, with more change expected the next decade than in the past 50 years, and there was a real opening in the market for positioning Silver Fern Farms grass-fed red meat for success.

Consumers were more conscious than ever of the environment in which their food was raised. They cared about soil health and emissions and were starting to question farming intensity and footprint, biodiversity, water quality and sustainability of food systems.

Over three years, the company had observed growing momentum in regenerative agriculture across its markets and Ms Johnston believed it was shaping up to be a story that answered consumers’ concerns.

Consumers did not necessarily deeply understand regenerative agriculture but various players were stepping up to educate them. Major multinationals, including Unilever, Walmart, Pepsi and Nestle, were committing to it and scrutinising the footprints of their suppliers.

There was a really good opportunity to act swiftly to leverage the platforms regenerative agriculture created "and tell a deeper story about how we farm differently", she said.

A lot of green washing and marketing spin in this article, the facts tell a different story. For instance a new UK study, published in the journal The Lancet Planetary Health, revealed that while most people are eating less red and processed meat compared to a decade ago, they are eating more white meat.
High consumption of red and processed meat can increase the risk of health problems including cardiovascular disease, type 2 diabetes, and even certain cancers.
Meat production also has a higher environmental impact - producing more planet-warming greenhouse gas emissions - than other types of agriculture and food production.