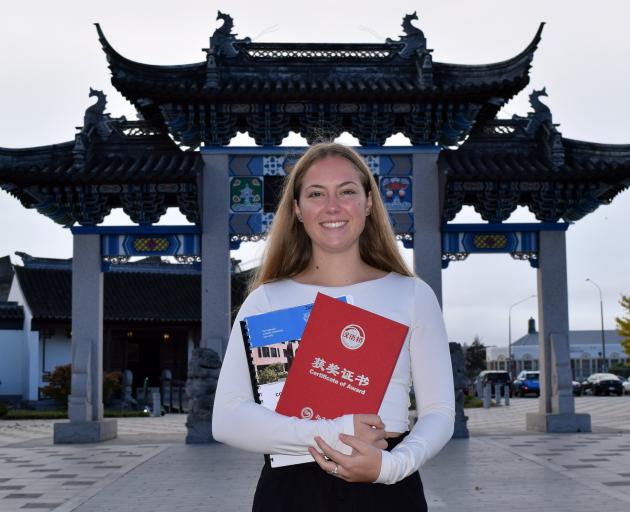 Meat Industry Association scholarship recipient Joelle Gatenby, of Dunedin, dreams of using her agribusiness and Mandarin language skills to help sell more red meat to China. PHOTO: SHAWN MCAVINUE
Southern students considering careers in the red meat processing and exporting sector were among the Meat Industry Association scholarship recipients for 2021. In a series, reporter Shawn McAvinue asks them about their study and plans.

Her dream was to use her agribusiness and Mandarin language skills to "bridge the friendship" between New Zealand and China and sell more red meat to the populous nation.

She learned to speak, read and write Mandarin at high school and represented Columba College at national Chinese speech and essay competitions.

Learning Mandarin was "extremely hard but rewarding" and would be an "asset" in a business career.

Her career aspirations stemmed from being raised on her family’s 173ha dairy farm in Riversdale in eastern Southland.

At the age of 8, she and her family moved to Dunedin. Sharemilkers were now on the farm.

At school in Dunedin, her favourite subject was agribusiness.

The pupils in the agribusiness class were a mix of girls from Columba and boys from John McGlashan College.

"It was really good. That sparked my interest in agribusiness and I wanted to continue that at university."

She was now in her second year studying towards a bachelor of agribusiness and food marketing at Lincoln University.

The $5000 scholarship was "great" and helped pay her tuition fees.

"They are quite pricey, so it relieves a lot of that stress."

The Meat Industry Association staff were "genuinely interested" in the career path of the scholarship recipients, who had all been invited to attend the association’s conference in Rotorua in July.

Through the association, she had had talked to Silver Fern Farms management about the possibility of a summer holiday work placement in Dunedin.

The plan was to get a job after finishing her undergraduate degree.

"I just want to get out there and give it a crack."