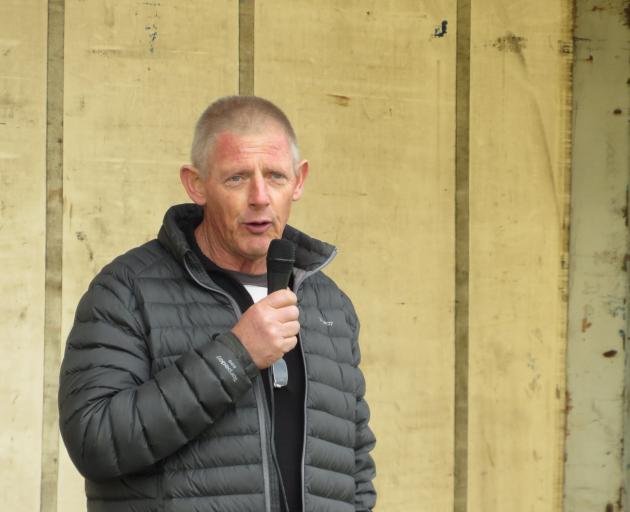 Mr Leferink, speaking at the Howl of a Protest in Ashburton on Friday, said farmers were sick and tired of all the regulations and needed a change where farmers would make a difference. 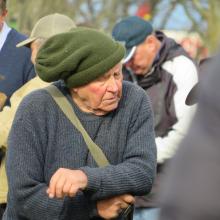 Ritchie Bruce, of Staveley.
"The ink is not even dry on the Canterbury Water Management Strategy," he said, and changes were already afoot.

"We as rural communities don’t get listened to," he said.

"We need to stick together, work together and help each other along ’cause we are sick and tired of working our arses off and not getting valued."

Mr Leferink was one of three speakers to talk at the Ashburton event which drew in hundreds of supporters and surprised organisers.

Ashburton protest organiser Jodan Townshend was blown away by the number of people who turned out to support the peaceful protest in Ashburton. 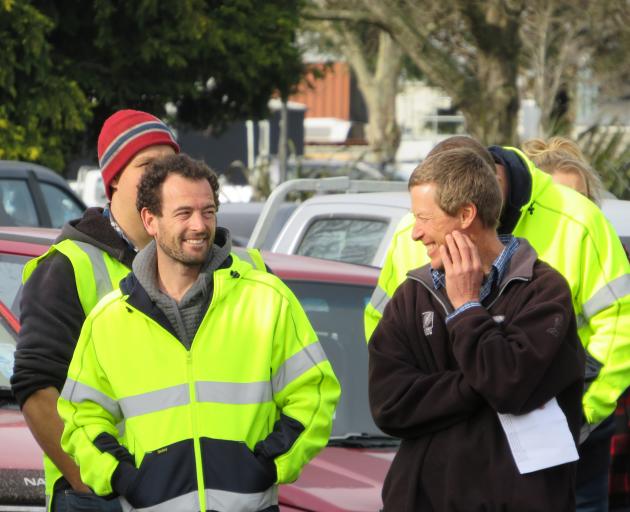 Ashburton protest organiser Jodan Townshend (left) and speaker Jamie McFadden share a laugh at the Howl of a Protest.
Utes and tractors were lined up along West St (the main road through Ashburton), along Walnut Ave and parked up in the railway yard opposite the Ashburton Domain.

Supporters came in all shapes and sizes, ages and stages.

They included rural and urban residents alike including people in businesses who flowed on the footpath to show their support with placards as the procession drove past.

Ritchie Bruce, of Staveley, was also there and said the lack of consultation was impacting on the rural community.

"I’m here because I disapprove of the way the Government is pushing through legislation which is not only stupid but it’s ill-conceived and not practical."

He cited river control, habitats for native species using science and the recent announcement of three waters authorities over a whole nation as "ridiculous".

"Those in control have little grasp of reality, I think," he said.

Farmer Ian Mackenzie, of Eiffelton, who was already publicly vocal about his opposition to rate rises and taxes in general, was also among the crowd.

He wanted to hear the sentiment of people he represented as an Environment Canterbury councillor.

Mr Ward said New Zealand was one of the world’s most efficient producers of food on a carbon emission basis. It was known worldwide but "we can do better, we will do better" but without the enforced myriad of rules and regulations being pushed on farmers.

The ute tax was "mean and spiteful ... picking on a group of people who have to have this vehicle for their use".

“ The ute tax was "mean and spiteful ... picking on a group of people who have to have this vehicle for their use".
We might see it as mean and spiteful but those that advocated for it are full of their own purity, good intentions, fantasy, entitlement and power.
Logic, facts, others suffering and unintended consequences don’t figure in their thinking.
They play to their political group think, patting each other on the back each time they sock it to the infidels. This is how ideological thinking works. They think they are doing good because their understanding, experience and thought bubble doesn’t extend beyond their ideology.
They are not connected to reality but an idea based on fear of the future.
There is no point in adding more EVs to our roads until we have finished with burning coal.
There is no point in banning the mining of coal until there is no longer a use for it.
There is no point in not drilling for gas until cleaner energy is available.
Carrots are needed, not totalitarians wielding sticks.
The technology and markets are out there but our regulatory systems often kill the innovation and commercial risk required.
These issues apply to housing too.

When you cast an ideological long bow, dragging everything unrelated to farming into it, you become part of the problem. The stirring of Advance NZ elements has been reported.

I imagine the problem for anti-Labour is the scattershot Opposition. Judith Collins inclines to dog whistle anti China comments, unto not trading with the Republic. Clearly, not with the interest of our primary producers in mind. Hard Right is just as bad for farmers.

And so is the hard left.

Having just lost a family member in an extreme weather event I think the population would be wise to fear for the future. Thankfully many are not as short sighted as you.

"The ute tax was 'mean and spiteful... picking on a group of people who have to have this vehicle for their use'".

So what happens when these people "Who must have this vehicle for their use" can't get any more utes as NO one is making them anymore!

You need to remember that NZ don't make any vehicles they are all imported. And for the size of the NZ market who will be making dirty diesel fuelled vehicles at a reasonable price just for NZ.

Farmers need to stop damaging the environment.
And seeing farmers who can afford to run expensive machinery to town to protest tells me that all concessions need to come off machinery and fuel. Why are taxpayers subsidizing this?