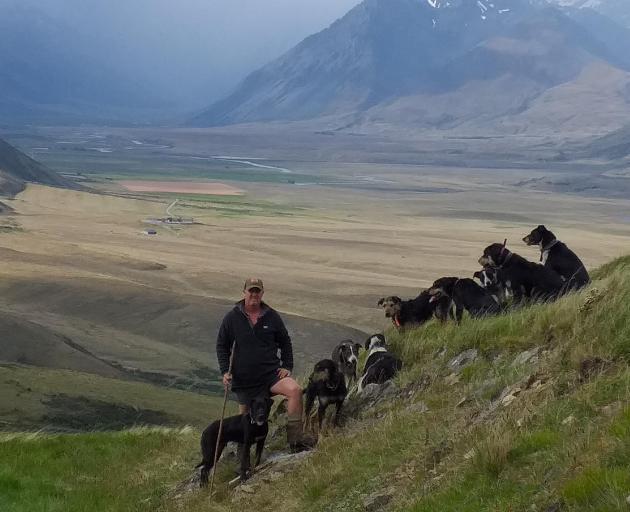 Omarama farmer and seasoned dog triallist Scott Hunter has three dogs qualified to run at next week’s New Zealand Dog Trial Championships in Greenvale, near Gore. PHOTO: SUPPLIED
Next week, Greenvale will come alive as it plays host to the New Zealand Sheep Dog Trials. Alice Scott talked to keen triallist Scott Hunter as he prepares for a big week.

Dog trialling. The keen enthusiast will chew through quite a few diesel kilometres in the ute, consume a few cups of coffee while waiting for their run and sometimes, for those who hang around long enough, may enjoy a cold beverage later on. Just the one.

For those just starting out and with a partner or young family — it will also likely mean preparing said loved ones for the impending days or (God willing) weekends of absence, all the while seasoned wives tend to happily nod as they hatch out their own weekend of matrimonial bliss.

Mr Hunter could be considered part of a minority of younger triallists who battle their way on to the leaderboard, up against some ageing but extremely polished and competitive triallists.

"It took a good while for things to finally come together for me," he said.

The stock manager from Omarama’s Longslip Station first qualified for a South Island championship in 2006 when he was 24.

Mr Hunter says he will likely never avoid the banter that goes with being married to Carla whose father, Lloyd Smith, is considered one of New Zealand’s best dog triallists. "Yeah, I cop a bit of grief about that. He certainly has been a great mentor."

Mr Hunter credits his success to a pivotal opportunity Mr Smith gave him; spending a week clerking while Mr Smith judged a championship trial. "That week was a turning point for me. I learnt a lot about the standard that was needed in order to consistently do well.

‘‘The more clerking and judging I do, the better my thought pattern has become. I have just chipped away with my training technique and breeding dogs that suit."

Mr Hunter will spend time training his dogs every day.

"I don’t have any set routine. It can be in the morning, at lunchtime or after work. It just depends what’s on that day. But I am quite disciplined in that respect."

The camaraderie that comes with dog trialling is what keeps Mr Hunter keen.

"I have made some good friends with people from all over the country through dog trials. I really enjoy getting up north and seeing people I only see once a year."

And he also relishes in the competitive nature of the sport. "Especially if it’s against the father-in-law," he said, laughing.