Alpha Burn Station was the fourth stop on the Upper Clutha On-Farm Call Sale last week. Station owner Duncan McRae (fourth from left) checks out proceedings with (from left) shepherds Ty Merwood and Mitchell Morton and his sons Archie and Riley. PHOTOS: SHAWN MCAVINUE
The solid reputation of calves on offer at back-to-back sales on five stations in Upper Clutha attracted a good spread of buyers last week. Shawn McAvinue was at the annual sale talking to vendors about the prices fetched and the benefits of holding a calf sale on-farm.

More buyers bet on black when bidding on Angus and Hereford calves at back-to-back sales at five stations in the Upper Clutha.

The 2300ha station lies more than 40km northwest of Wanaka, where the Aspinall family have been farming for more than a century.

All of the nearly 300 heifers and steers — a mix of Angus and Angus cross and Hereford — on offer sold.

"That was good — we are really happy — good prices," Mr Aspinall said after the sale.

The second stop was 5500ha Matukituki Station, about 10km on the road back towards Wanaka.

Matukituki Station manager James Stewart said he had more than 200 Angus and Angus cross steer calves on offer and all of them sold.

Prices were "well up" on last year, he said.

The third stop was 6500ha West Wanaka Station, which wraps around the southern end of the Buchanan Range on the western shore of Lake Wanaka.

He was happy with the number which sold considering feed supply was short in parts of the South.

"There’s not the local buyers around at the moment because of the feed situation but on a whole it went well — the steers sold well."

The heifers did not reach reserve price.

"We held on to the heifers and we will finish them ourselves."

The heifer market had been weakened by the feed shortage and Covid-19 disruptions making it harder to get cattle to the meat works.

At the foot of Niger Peak on Matukituki Station are station manager James Stewart (fourth from left) and (from left) tractor driver Charlie Flanagan and shepherds Bruno Mills, Billy Hayes and Georgie Gibbons. They also sold all their stock and noted good prices.
A benefit of having an on-farm sale was if a pen of stock did not make reserve, it was easier getting them back in a paddock, than if the sale was off-farm.

Buyers travelled back to the road between Mt Aspiring and Wanaka for the fourth stop — the 4200ha Alpha Burn Station.

Alpha Burn Station owner Duncan McRae said he had 400 calves on offer at the sale.

Nearly all of the calves sold but prices were down on last year.

A cause for the price drop could be due to lack of feed around and a drop in the number of buyers from Southland.

"That was OK." he told Southern Rural Life after the sale, "I’ve sold most of them so that’s good."

The final stop was 2600ha Hillend Station, on Cardrona Valley Rd, about a five-minute drive from Wanaka.

At Hillend, calves were also on offer from Avalon Station, The Larches and Highlandburn Partnership. 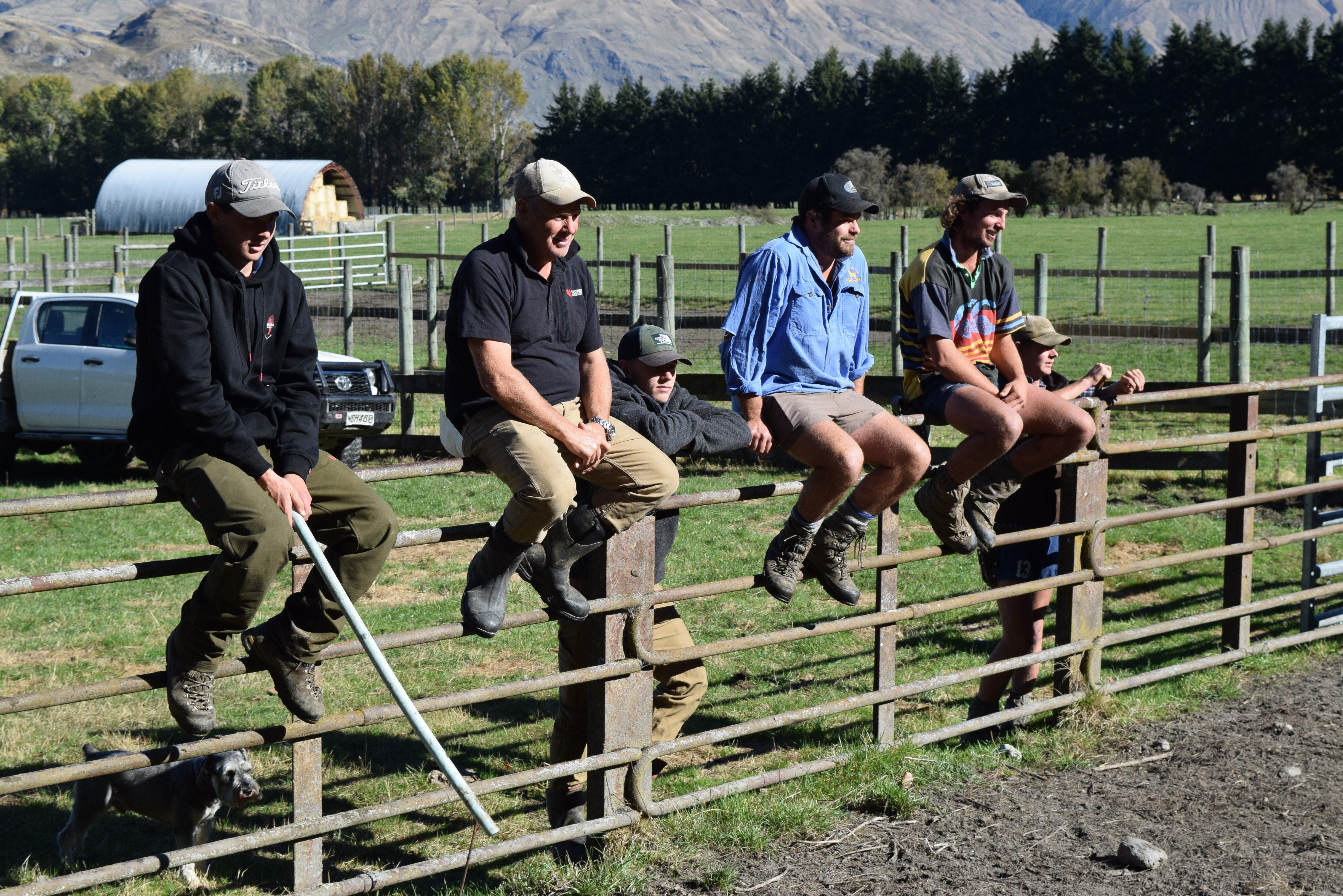 At West Wanaka Station are station owner James Cochrane (second left) and (from left) sons Oscar and Hugo Cochrane, stock manager Andrew Goulding and shepherds Tyler Sowman and Lui Arnold. Their steers sold well but they kept their heifers to finish on the farm since they fell short of their reserve.
Hillend Station manager Mike Scurr said the offering from Hillend was about 50 Angus steers and 25 Angus heifers.

All of his calves sold.

"We cleared the decks."

He was happy with the prices paid.

"It was a big lift on last year, so that’s really good."

Being the final farm on the sale route was risky because buyers might have spent their money before getting there.

PGG Wrightson Otago livestock manager John Duffy, of Alexandra, said Mr Scurr should not worry about his spot on the sale circuit as the prices fetched at Hillend Station were on par with other vendors.

"As long as the quality is there, the buyers will stay. It was the same crowd competing right to the end."

Angus and Angus cross steers had been the most sought after breed at the sale and for the calf sale season. 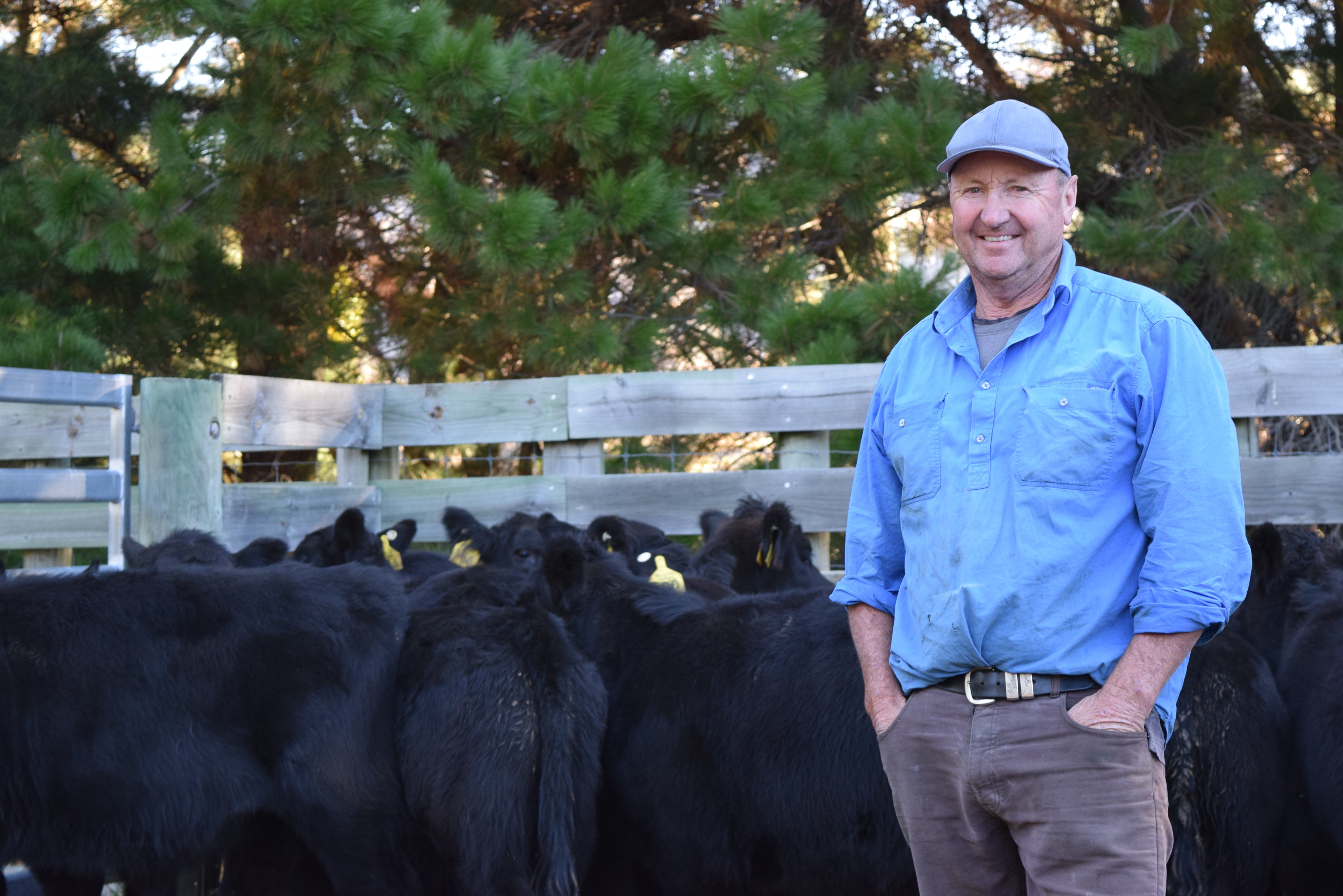 Hillend Station manager Mike Scurr in a pen of his Angus calves at the sale last week. He didn’t mind being last on the sale route since they were still able to "clear the decks".
Of the 1100 calves which sold at the Upper Clutha sale, 800 were Angus or Angus cross steers.

The Hereford bull calves sold for $860.

Most of the calves went to regular buyers from the Upper Clutha, Maniototo and Omakau.

Some calves went to farms in Southland and South Canterbury, he said.

"It was a good spread of buyers. The calves have a good reputation and people that have had them before always seem to want to come back and get them again." 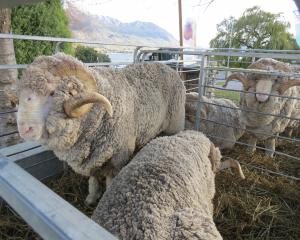