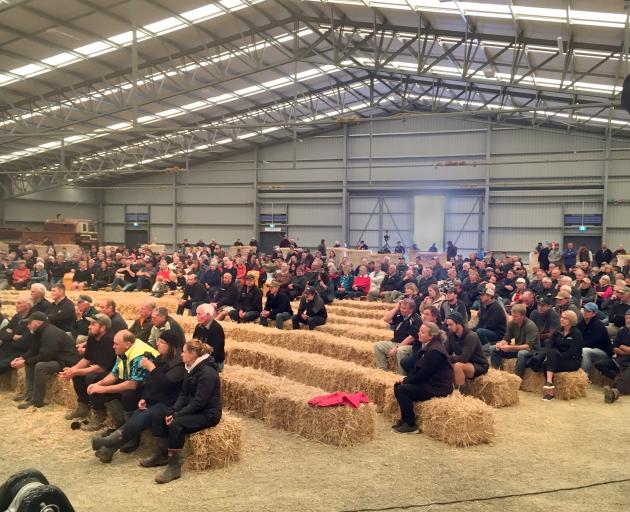 More than 500 people attended the meeting at The Woolshed Function Centre on the Southern Field Days site in Waimumu.

The meeting was run by farmer’s group Groundswell.

The group was formed after farmers drove more than 100 tractors through central Gore in October last year to protest against the new National Environmental Standards for Freshwater, introduced a month earlier.

The regulations aim to improve freshwater quality, widen the range of activities requiring resource consents and tighten conditions for many existing consents.

Sheep and beef farmer Logan Evans, of Otamita, said the "unworkable" regulations would stop young people with a dream of owning a farm from entering the rural sector.

He played a recording of the bugle call Last Post as he challenged farmers to take a stand against the "ridiculous new rules".

"Have we got the balls to stick up for ourselves?"

He spoke about the environmental work farmers had been responsible for, such as the Pomahaka Water Care Group.

"You should be bloody proud," he said.

Farmer and environmentalist Jane Smith, of North Otago, said "farmer apathy" was the biggest threat to the industry, so "your voice is so important".

She encouraged farmers to write a list of the environmental work they had completed and share stories about how it had made a difference.

She asked farmers to use science and continue to ask why rather than comply.

Groundswell spokesman and dairy farmer Bryce McKenzie, of Pomahaka, who drove a tractor in the centre to speak, said a petition seeking a rewrite of the rules had received more than 2500 signatures and been given to the Government.

Speaking to the Otago Daily Times before the meeting, he said catchment groups and regional councils should be setting the regulations.

"There is no one-size-fits-all for the whole of New Zealand."

Future protest action plans were not discussed by the group.

The degradation of our water ways has gone on for many years now and is well documented with market forces and farmers unable to do the right thing and sort it out. We hear of their unhappiness about the new laws without hearing detail of what they object to. I want to be able to swim in our rivers again.

They object to spending their own money on the work required to put good the damage caused by generations of exploitation of the resource with non sustainable farming practices. This is all about money, their money, and they want to keep it and have you pay for it through Govt grants. Capitalise the profits, socialise the losses, it's the ongoing mantra of the NZ farmer.

And, it's self defeating. The new rules are in place because the countries that buy our primary produce have started to demand that the farming practices used to produce them can be shown to be ecologically sustainable. This is part of what they have signed up to do under the Paris climate accord and earlier international climate treaties. Quite simply if we as a country don't do these things they will stop being our products. It's as simple as that. Our Govt has chosen to act on this element of sustainibilty improvement by putting the obligation to fix it squarely on those who caused the problem in the first place, the farmers.

Firstly, the farmers didn't sign up, politicians did. Secondly, our biggest market is China. Look up their stats on sustainability!!! What long-winded dribble again, from an 'I hate people with assets' person.

Response to tairei b comment 13 Feb.
Oh, I do look at China. Every NZer should follow them very closely as they will have the greatest impact on our long term future. No need to tell you that China has committed itself to the UN Sustainable Development Goals (\SDG) for 2030 and that they are working to a strategy that will bring them to compliance long before any of the western democracies. Also, as you are so well acquainted with Chinese policies you will know that for the last 8 years they have been visiting NZ freezing works and dairy factories who are looking at exporting products to China. The Chinese licence individual factories for export purposes, not the companies as a whole. One of the elements that they look at is sustainable practices. It doesn't matter what their record at home is like, if you want to export to china you have to meet the SDG Standards. Also the Chinese are our biggest fresh water buyer, they want to prevent contamination of the resource for the future, this is another underlying reason for the new regulations. Fresh water is becoming a valuable commodity.
As the owner of a small freehold lifestyle block I can assure you I don't hate asset owners.

They are objecting to new rules and regulations that are overly fussy and will cost them time and money. They will also be hard to regulate and enforce. Unfortunately this has come about because we have a government which refuses to take any meaningful action to protect our environment. They are a government of compromise. They are failing to protect our oceans, our rivers and our natural landscapes. They constantly treat the symptoms but refuse to even acknowledge the causes. They fiddle with rules to minimise the risk instead of just eliminating the threats.

These anti environment greedisgoodites need to be held to account for the damage they do.
The penalty for polluting a waterway should be the confiscation of the land. Polluters should not be allowed to own land, take it off them and sell it someone capable of running a sustainable, non polluting farm.
These hillbillies can then put their feet up and live a life of luxury on the dole.

I like the idea of the penalty for polluting waterways being confiscation of the land. After all it's likely the land was confiscated from the original owners simply because they were Maori!