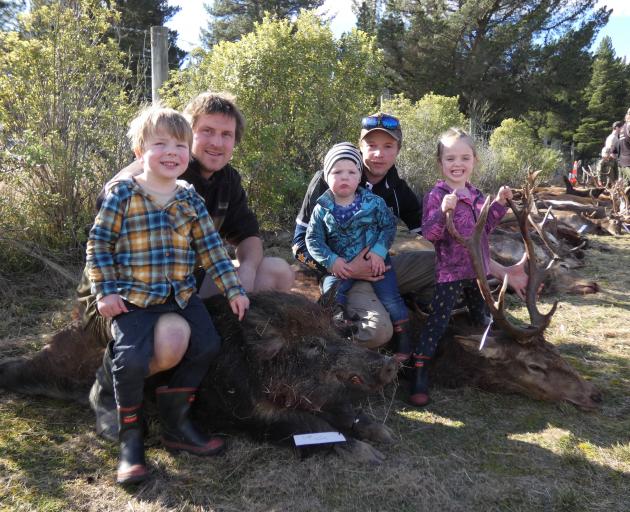 Clyde hunters (from left) Walter Horrell (4), dad Jarod Horrell with a 79.2kg boar, Hunter Hartman (1), his father Dan Hartman, and sister Sophia Hartman with a 110kg stag all shot as part of the Manuherikia Boar, Buck and Stag Hunt. PHOTO: JARED MORGAN
Ask hunters where exactly in Central Otago they shot their haul in the annual Manuherikia Boar, Buck and Stag Hunt and they are unlikely to tell you.

They want to protect their turf and believe the results speak for themselves.

It was heartland rural New Zealand at its best if the atmosphere at the weigh-in and prize-giving was anything to go by.

Organiser Brett Leckie admitted he had misgivings about this year’s event after the Covid-19 lockdown but it had surpassed previous years in terms of those competing and those who rallied to sponsor the event.

"It was difficult times and I knew it would would be hard to get sponsors."

He was determined to hold the event as scheduled "no matter what".

Whatever the pandemic threw at the community was a bridge to be crossed later.

"We were worried about sponsors but it was actually people who work in the hunting industry and hunters themselves who stepped up."

That was reflected in the numbers that took part and the number of animals, he said.

In the past the event typically raised about $5000 "on average" for the Scout group, but this year he believed that figure could be closer to $6000-$7000.

That was reflected in the number of people taking part — from the 43 teams who registered 33 turned up at the final weigh-in.