Canterbury A&P Association president Chris Herbert said at lunchtime on Friday he was looking forward to a quiet beer in the president's tent ''to sit down and reflect'' on a busy three days.

''I'm extraordinarily happy. It's a blue bird day today. I don't have any official numbers, but it would have to be up there.

''It's absolutely magic. People came early and they were queuing up to get in this morning and I hear people are still queuing now.

''What was a two-minute walk has turned into a half-hour journey.'' More than 100,000 people were expected to visit the show to catch a glimpse of the more than 6000 livestock and feature competition entries and 500 trade sites at New Zealand's largest agricultural show.

Canterbury A&P Association president Chris Herbert made sure the president's marquee was fit for a king. Photos: David Hill

Around 550 volunteers contributed to make the event possible at the 42ha purpose-built showgrounds, with more than $16million expected to pass through the tills at Canterbury Agricultural Park over the three days.

Among the show visitors was Agriculture Minister Damien O'Connor, a former dairy farmer, who was keen to promote wool as a sustainable product for New Zealand farmers.

Mr O'Connor was joined by Australian Agriculture Minister Bridget McKenzie at the show on Friday.

Livestock judging was held over the three days, while the Hazlett Farmyard was popular with young and old and New Zealand dog trials test team captain Andy Clark, of Banks Peninsula, was among the competitors.

The opening of the first Irish embassy in Wellington last year saw the green hills of Ireland being promoted at the show for tourism, business opportunities and to farm workers, with Irish ambassador Brad Burgess spending Thursday at the show.

There were plenty of opportunities to taste local produce in the Food and Wine Village, while Heritage New Zealand was promoting the importance of protecting archaeology or pre-1900 evidence of human settlement on Canterbury farms.

Canterbury A&P Association board chairman Stewart Mitchell was pleased with the show crowd on Wednesday.

Canterbury A&P Association board chairman Stewart Mitchell was pleased with the way the opening day went on Wednesday.

He said the board provided the governance and the show committee was responsible for the three-day event itself.

While the association owned the livestock pavilion, the grounds were owned by the Christchurch City Council and leased to the association to administer throughout the year.

''We are responsible for managing the grounds, overseeing the administration and the event director and making sure we are doing enough to attract Joe Public and on the face of it, this looks like a good Wednesday crowd,'' Mr Mitchell said.

''There's a lot of moving parts and health and safety is a big issue for us, but at the moment it's all looking good.''

Mr Herbert said there was one major drama on Thursday morning, with a spike put through a water main half an hour before cattle judging. 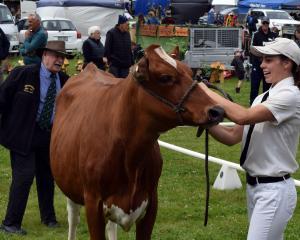