By Daniel Birchfield
0 Comments
At just 12 years old and with five years of experience, Chloe Ruddle is a rider for rodeo fans to keep an eye on.

The Oamaru girl competed in the junior barrel race at the 64th annual Waimate Rodeo at the Southern Canterbury A & P Showgrounds yesterday, one of 32 riders listed to take part in the discipline.

While Chloe was unable to secure a top-three finish, she was happy nonetheless.

"I’m really happy with it. 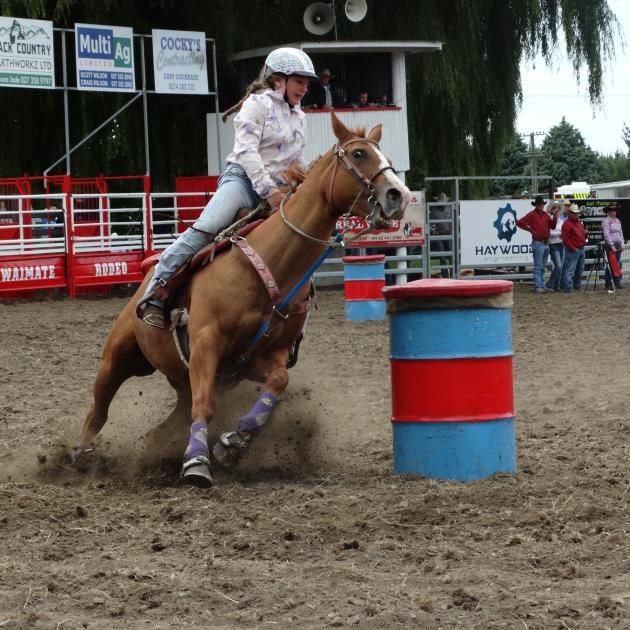 Oamaru’s Chloe Ruddle (12) guides her horse around a barrel in the junior barrel race at the Waimate Rodeo at the Southern Canterbury A & P Showgrounds yesterday. PHOTO: DANIEL BIRCHFIELD
Chloe, who has raced for five years, has shown good form in recent times, finishing second twice and winning in Methven in 2019.

Competitive by nature, she has a friendly rivalry going with her siblings — Amy Parish and Ryan Tate — who got her interested in the sport.

"My older sister barrel raced and then we kind of got me a pony ... it’s the excitement of it and the nerves you get. It just makes the racing that much more exciting.

The majority of riders got thought relatively unscathed with a few bumps and bruises, with the exception of Outram’s Russell Beattie who sent a ripple of concern through the several hundred

He took a nasty fall during the second division saddle bronc and looked to have been knocked unconscious.

However, he walked away with the assistance of St John staff who came quickly to his aid as he lay prone.