All about taking Southdown ‘to next level’

Don Murray, of Lawrence, views some of his Southdown sheep. Photos: Supplied
Southdown sheep might be a breed steeped in history — it is the oldest of the terminal sire breeds in the UK — but a group of breeders in New Zealand is firmly focused on positioning it for the future, as  Sally Rae reports.

Lawrence farmer Don Murray quips he is a novice when it comes to breeding Southdown sheep.

There were stalwart breeders who had been there "forever" and from whom he had learned a lot since establishing his stud in 2006.

Mr Murray said he had always liked breeding sheep and was interested in recording. His father-in-law, who had bred Southdowns, further encouraged his interest to venture into stud breeding.

He had always been impressed by the breed, particularly its early maturity and ability to get lambs on the truck early.

His stud ewe numbers had built up to about 240 and were run in conjunction with a total operation of just under 5000 stock units on 550ha, following the recent acquisition of more land.

It was a hill country property and so it was a different environment from some areas where stud sheep were farmed, and had larger paddocks and gullies, yet the breed thrived.

He sold 60-odd rams a year and with many being used for hogget mating, he thought he had better go back to that himself.

Now two years into hogget lambing, it was "just so easy", resulting in good lambs at weaning and a very saleable product.

Last year, 40% of his works lambs went on the truck at weaning and a lot of those would have been Southdown-cross, he said. 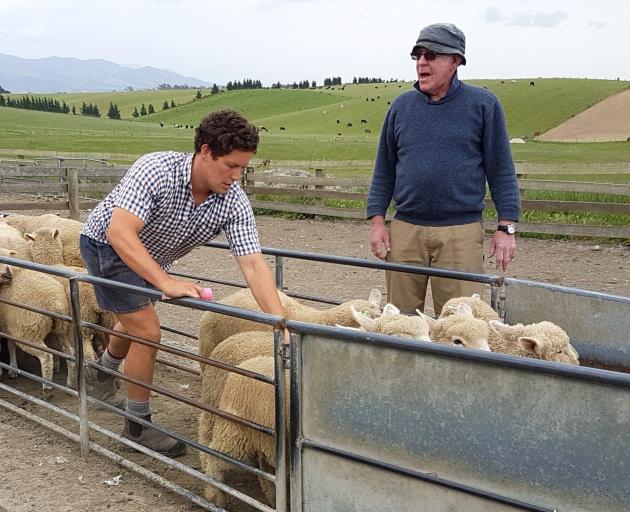 Southdown-cross progeny test lambs being graded by Miles Medlicott at weaning, watched by John Macaulay.
That was where the real advantage of the breed was — "the ability to be gone" — and to yield at a variety of weights.

Now breeders were trying to the breed "to the next level" and the establishment of a Southdown progeny test was about providing validation, he said.

The progeny test, based at Simon and Kirstin Engelbrecht’s property at Stoneburn, near Dunback, was now in its second year and involved 20 sires from 14 breeders from Northland to Southland.

The Engelbrechts did not traditionally use Southdowns but were interested in supplying breeding ewes for the programme.

Mr Engelbrecht was responsible for getting the ewes in the trial mated and the lambs on the ground.

Lamb survival of the Southdown-cross progeny was excellent with less than 4% losses from lambing to tailing. Lambs would then go to Southdown breeder Chris Medlicott’s specialist fattening operation near Waimate to be finished.

One of the drivers of the programme, which is being supported by Beef + Lamb NZ Genetics, is Oamaru Southdown breeder and veterinarian Dave Robertson.

It could be difficult for smaller breeds to get scale to get good performance recording numbers, Mr Robertson said. The solution was to have a progeny test where the environment was standardised.

Objectives included getting better accuracy and reliability with performance recording, better genetic connectedness between breeders, comparing commercial meat quality traits within the breed, exploring some of the genetic technologies that were available for modern sheep breeding and looking at things like intramuscular fat and eating quality, and demonstrating the commercial relevance of the breed to industry.

There had always been the perception that Southdown and Southdown-cross had good eating quality but one of the aims was to get numbers around that. 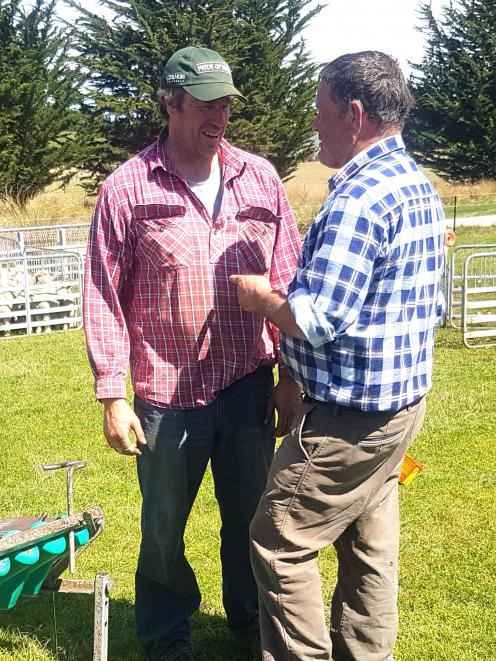 Stoneburn farmer Simon Engelbrecht (left) and South Canterbury Southdown breeder Chris Medlicott discuss the logistics of the Southdown progeny trial.
"We want Southdown sires that produce lambs that grow fast, yield well and taste good — with the science to prove it," he said.

Traits other than production were also important to breeders, with the likes of structural soundness and feet still important to the breed.

To be able to have a "snapshot into the future" of what a ram lamb could produce was very powerful. It removed some of the "guesswork and hoping something clicks" with a breeding programme.

The next step was how to harness that information and it had the potential to change how genetics were chosen.

Southdown New Zealand president Todd Anderson, of Winton, said the breed had continued to evolve over time to meet the requirements of the industry.

The main focus was to maintain "killable growth’ — meaning that lambs were killable at any stage, from 14kg or 15kg if need be through to 25kg "or whatever", Mr Anderson said.

Breeders had a strong belief that it was not just about mass production, it was about quality of product.

The only way for New Zealand to economically progress was to sell a premium product to people that had the means to pay for it.

Part of that was that the consumer would want a story. The Southdown  was one of the oldest sheep breeds in the world. And as far as meat quality was concerned, it was about grain, colour and marbling.

Mr Anderson said the breed was  the wagyu of the sheep world in some ways and produced "beautiful quality meat".

There had to be a conscious effort not to lose those attributes and so the instigation of the progeny trial was very exciting.

Carcass attributes, finishing ability, feed efficiency and killable growth were factors that were important to  Southdown New Zealand  as breeders, as well as to its clients in the sheep industry,  if it wanted to be in that global niche market.

New Zealand needed to realise that if it continued to sell based on commodity needs, then it would fast-track itself to the "bottom of the rung".

Southdown breeders had always been proactive in terms of embracing science, so that was not something new, while stockmanship was also an important aspect.

The future — by continuing to maintain killable growth and a quality product for the consumer — was looking bright, but breeders also acknowledged they could not "stand still and rest on our laurels", he said.

He watched last season’s lambs go through the process at Alliance Group’s Smithfield plant on January 31,  almost 450 lambs weighing in at an average of 19.4kg.

He was impressed with things in the cooling room, where the lambs were a "sight to behold". Looking across at comparable lambs of other breeds, they were "all over the place with no uniformity", he said.

Ultimately, it was about growth rate, muscling and protein  being produced as quickly as possible and the Southdown was one of the breeds that could do that.

There were about 70-odd registered breeders in New Zealand and most were "totally dedicated", which was one of the reasons the breed was performing, he said.