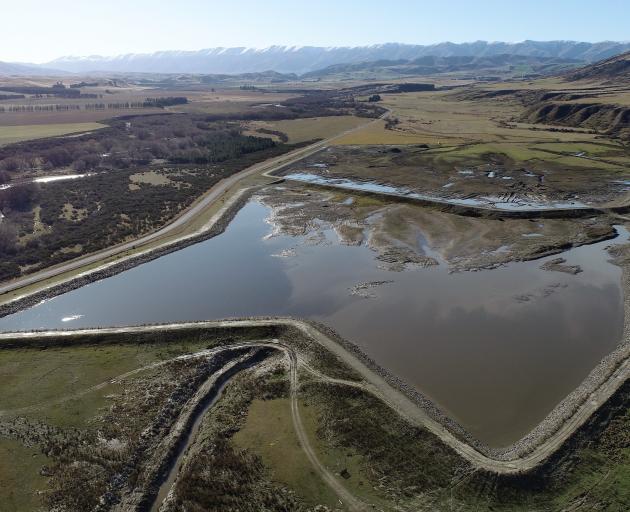 A pair of fortress-like irrigation ponds are ‘‘future-proofing’’ the Hore farm near Omakau for those dry years. PHOTO: STEPHEN JAQUIERY
Maniototo farmers Ben and Vanessa Hore’s irrigation ponds can potentially be seen from space.

The notion amuses the couple, who farm at Blackstone Hill, near Omakau, and their irrigation ponds alongside State Highway 85 attract a fair amount of attention — they are that big.

Each pond is 14ha in size, and they are quite possibly the biggest in the district.

They are to future-proof their 101-year-old farm and while the whole concept of water conservation and quality is a touchy subject, the Hores are adamant this is the way to go for them.

"We’ve had ponds, but nothing that scale, and yep, they’re pretty big," Mr Hore said.

With the dry climate, Central Otago has traditionally relied on water storage for irrigation.

Many farmers have moved to more efficient means of using water such as sprinkler/spray irrigation through a network of pumps, valves and sprinklers, which distribute the water in a similar way to rainfall.

"To justify having the spray irrigation infrastructure we had to ensure that we could use it when we need it," he said.

Minimum flow options for the Manuherikia River are under consultation and five scenarios are on the table.

The outcome for farming is the higher the minimum flow, the lower the reliability of irrigation.

"If we have enough stored, we can use it," Mrs Hore said.

"Typically, when you need it, you don’t have it, so you’ve got to store it. It’s really more in the particularly dry years."

They saw irrigation ponds on similar scale as a future trend.

"There will be more people who will put in ponds for farm storage. You’ve got a lot more pivots. They’re under a lot more pressure, and there’s a lot more issues going on with minimum flows."

Mr Hore said the first pond built had been in operation for about four years, and the second in use for about a year.

The "old fellas" of the family built them.

"We’ve only got one bulldozer, so it took a while."

It was a massive effort to build them and definitely a family affair.

"We killed a digger. The ponds ate a few bits of machinery."