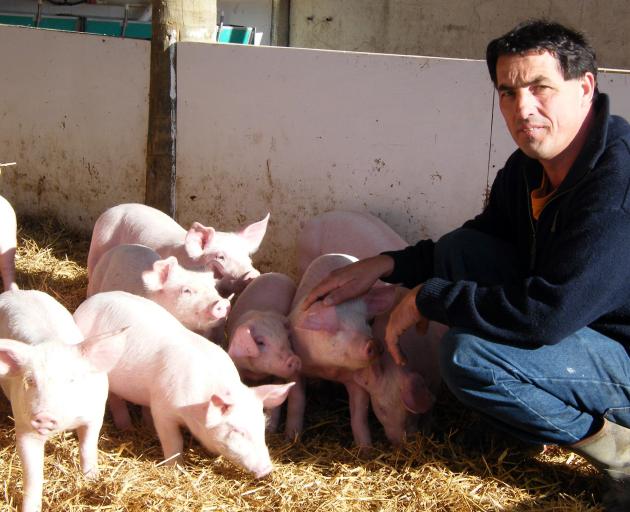 Ian Carter. Photo: ALLIED PRESS FILES
Former New Zealand Pork chairman Ian Carter is saddened by a High Court ruling that the use of farrowing crates is unlawful, saying they save "millions" of piglets globally every year.

Animal welfare groups Safe and the New Zealand Animal Law Association took the Attorney-general, the Minister of Agriculture and the National Animal Welfare Advisory Committee (NAWAC) to court in June saying the use of farrowing and mating crates breached the Animal Welfare Act 1999, RNZ reported.

In its decision, the court said the agriculture minister must consider new regulations phasing out the use of farrowing crates and mating stalls, and improve minimum standards.

Mr Carter, who farms in North Otago, said no other system got close to meeting the needs of farmed pigs. He estimated farrowing crates could save more than 200 piglets a day in New Zealand if they were universally used.

"I have spent my life understanding and farming my animals with care, and to know that I may be forced to change from a proven system that cares, to one that will create more harm than good, is tough to contemplate," he said.

Mr Carter, who stepped down in 2018, was board chairman and one of the industry representatives during the NAWAC farrowing crate review. There was a complete and thorough investigation into farrowing systems completed by NAWAC in 2016, he said.

"There has been no new science since to suggest any need for significant change. For the benefit of an animal’s welfare these decisions must only be made on science not emotion or perceptions which can have unintended consequences that cause more harm than good. Emotive and perceptive decisions should be left solely for the individual consumer to make at their point of purchase," he said.

A farrowing system was used for about four weeks; from just prior to birth through to weaning at up to four weeks of age. During that time, the sow did not need to concern herself with safety, predator threat, shelter, warmth or seeking food or water, and could focus on nurturing her piglets.

The piglets had areas that were warmed at a higher temperature than the sow, which helped provide them freedom from the sow accidentally laying on them and killing them with her weight, Mr Carter said.

Sows were large (250kg plus) animals which gave birth to large numbers of piglets, each roughly weighing 1.5kg. Accidental lay-ons were the biggest driver of mortality in pig production.

"Those who understand our animals see the farrowing system for what it is, a maternity unit of care," he said.

In a statement, SAFE and NZALA welcomed the High Court’s judgement, with SAFE chief executive Debra Ashton describing it as a historic day for animals.

"After exhausting all other avenues to free mother pigs from cages, we had no other option but to take this landmark case to court," she said. It was the first time a Code of Welfare had been challenged in court.

New Zealand Pork animal welfare scientist and adviser Kirsty Chidgey told RNZ that more than half of pig farmers used farrowing crates and it was important to consider piglets.

About 60% of pork consumed in New Zealand came from countries overseas with worse animal welfare practices than New Zealand.

One consequence could be fewer farms existed in New Zealand and more pork would be imported from those countries, Dr Chidgey said.

Mr Carter made me laugh. He said: "Those who understand our animals see the farrowing system for what it is, a maternity unit of care," It made me laugh again to type it out here.
Mr Carter is telling fibs. Modern farrowing systems area means of maximizing profit. Simple as that. If he could find a better way of improving his margins he'd dump it like a shot.
Farmers are businessmen, first and foremost. Like all businessmen their prime motivation is profit. They have to be dragged, kicking and screaming their protests, to implement any changes that might cut their margins, irrespective of the impact on their animals or the environment. They've made that abundantly clear.
Mr Carter knows very well that there are other equally safe, traditional methods of providing perfectly safe farrowing conditions and are not cruel. But they are more expensive, will cut into profits, bad for business. Never mind the pigs.
Mr Carter should be ignored.

Well said. Apparently the editor didn't like the tone of the comment I wrote earlier, so I will agree with what you have said and just add some facts.
A farrowing crate is a metal cage – usually with a bare concrete/slatted floor – which is so narrow that the sow cannot turn around, and she can only stand up and lie down with difficulty. It deprives sows of almost all natural behaviours; they cannot nest build, explore, exercise, forage, socialise or escape teat bitting by her piglets. An increase in abnormal behaviour such as sham chewing and bar-biting might also be observed indicating severe frustration and stress, and sows in crates can exhibit behaviour likened to clinical depression. Farrowing crates have been banned in Sweden, Norway, and Switzerland, with I believe about 40% of NZ pig farmers refusing to use them.
Reducing ones red meat intake (that includes pork) is good for the environment, good for health and good for the animals.

I'm horrified by this article on so many levels. The high court (yes!! The HIGH COURT) have just ruled that farrowing crates are unlawful. Where is the article reporting this historic milestone?? Why is this little opinion piece slipped into the business section? This ruling will bring NZ into line with other progressive countries who have banned farrowing crates. Oh, and they don't have the ridiculously inflated piglet mortality rates alluded to in this "article". Get it together ODT....your readers demand better.