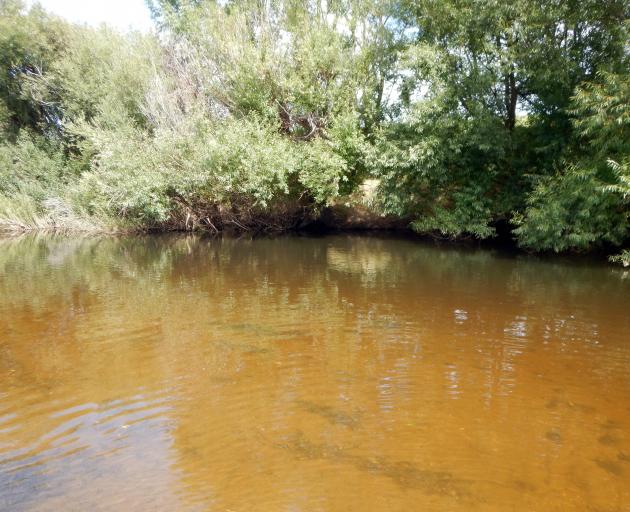 Typical lower Taieri willow-grubbing water is slow and deep, of course with overhanging willows. It’s an obvious place to go fishing. PHOTOS: MIKE WEDDELL
Rivers have continued to fall over the past week and most are now at a fishable level as fine weather makes it more pleasurable to fish for trout.

Having fished several rivers in the past month it is noticeable how much recent big floods changed them.

There’s a part of the lower Taieri that’s much shallower and it is possible to wade down the middle of the river, whereas a few hundred metres upstream where it was possible to cross it is now too deep to do so.

After big floods, a river has to be relearned. Anglers bemoan the loss of favourite fishing spots but, for every one lost a new one is formed, it is just a matter of finding them, which just adds to the interest of fishing.

Another consequence of big floods is that flow and height gauges that regional councils rely upon for data displayed on their websites are knocked out of kilter and need recalibrating.

Both can be correct at the same time but is confusing for an angler trying to choose where to fish.

One place I know the shape of the riverbed has changed with a deep channel being filled with gravel, lifting the riverbed an making the water level higher on each side.

A 2kg brown trout caught willow-grubbing on the lower Taieri River.
Eventually the gauges will be recalibrated but more usefully the regular angler will over a number of visits build up a mental picture of the river to match the reading on the website.

I have been lucky enough to get out fishing three times in the past week, all of them on the Taieri.

The most recent session was on the lower Taieri and the most remarkable thing was the chirping of cicadas.

I cannot remember hearing cicadas before on the lower river.

It was the sort of day that I associate with cicadas, hot and sunny. I did not see any of them on the water but I am sure some will end up there sooner or later and trout will make the most of the opportunity.

There were trout rising and of course it was to willow grub.

Some obliged by taking my fly and others steadfastly ignored it.

I also spotted the biggest shoal of perch I have ever seen in the Taieri and accidently caught one when casting at a trout beyond them.

The other two visits were to Strath Taieri and the Maniototo.

The former had fish willow-grubbing that were hard to get on to because of a strong northwester rippling the water making spotting them difficult, but the quality of fish made up for lack of numbers.

The Maniototo visit was quiet in the morning but as often is the case up there, the better fish came to the diving beetle in the afternoon.

I think a trip to the Mataura is likely this weekend.