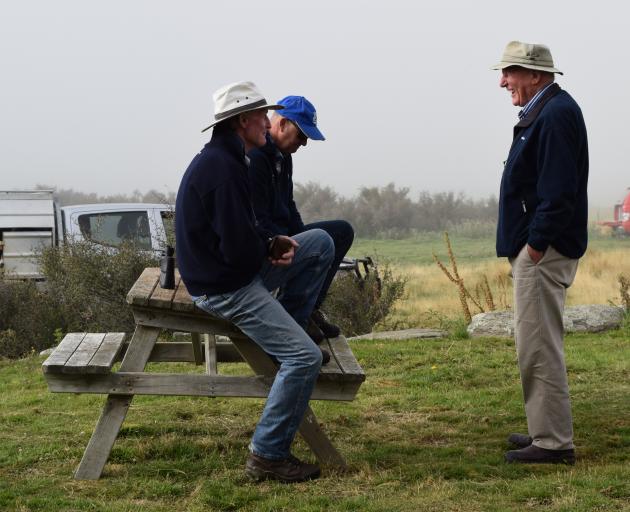 Waiting for the fog to lift at the Strath Taieri Collie Club dog trials in Middlemarch on Friday are (from left) Graham White, of Taieri, Brian Sparrow, of Kaiwera, and Ewan McLeod, of Brighton. PHOTOS: SHAWN MCAVINUE
Shepherds and working dogs had to wait for a thick blanket of fog to lift for the Strath Taieri Collie Club dog trials to start in Middlemarch on Friday.

Club president Shane "Pup" Houston, of Middlemarch, said about 35 shepherds vied for prize money and points at the two-day event.

Shepherds accrued points to gain entry to the South Island Championships and the national finals in Gore in May.

On waiting for the fog to lift, Mr Houston delivered smoko for the two liberators at the top of the hill for the drive and yard.

The liberators waited to prepare flocks of three romney ewe lambs to starting positions for a shepherd and heading dog to get down the hill, through a gate and in a pen in under 14 minutes.

Liberator Johnny James (67), of Middlemarch, said he began running dogs and liberating sheep aged 16, and had only missed two of the club’s trial events. 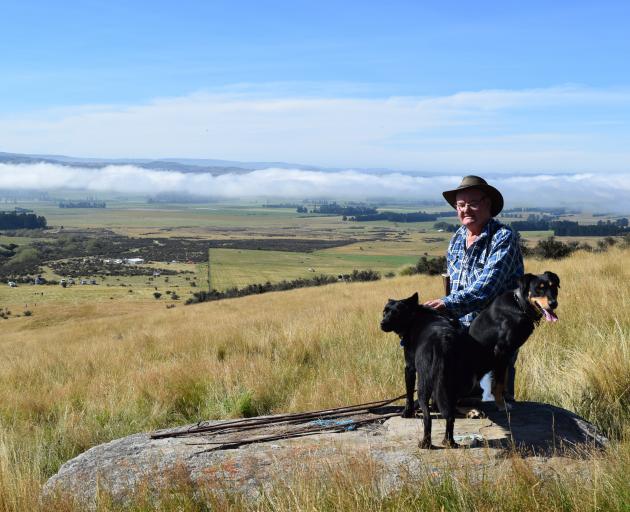 Liberator Johnny James pats his dogs Arnold (left) and Bob on a break working at the Strath Taieri Collie Club dog trials in Middlemarch on Friday.
He was born and raised in Middlemarch and was one of the final babies delivered at Louisa Roberts Hospital in the district.

On Friday, he had help from his two dogs — Australian kelpie Arnold and "shandygaff" Bob.

The best heading dogs could wag their tail as a tool to move a flock of sheep, he said.

"You want a real
tail-wagger."

His tip to shepherds competing in the valley was to get in as early as possible, before it got hot and windy.

"It’s famous for blowing up here."

Fog was the only weather condition to stop a trial, he said.

Over the years, the quality of the dogs had improved.

The number of shepherds had decreased but there were more women.

Mr James said he would continue to liberate until "I fall over".

The job had become more difficult since having his hips replaced about two years ago.

"I’m not so good at getting over the rails now — that’s
why I have this young fella
up here."

Liberator Nick "Shaggy" Drummond said his bosses Andrew and Lynnore Templeton, who run 5200ha sheep and beef property near Middlemarch, had given him time off to liberate and compete with his heading dogs Fi and Toby.

He had been a shepherd across New Zealand but the valley was his favourite place to work.

"This is the land of milk and honey," Mr Drummond said.