The rain last weekend disrupted the fishing for a few days, but it looks to be fine for the last day of the season tomorrow.

Most rivers have dropped back to a fishable level and should warm up a little by then. The bigger rivers, the Pomahaka, Taieri, Mataura and even the lower Clutha, are all fishable and offer the good chance of finishing the season on a high. I used the term ‘‘even the lower Clutha’’ because there was a tremendous amount of rain in the Alps at the end of last week but it must be being used to fill up the hydro dams, which keeps the lower river at a medium flow.

Several times over the past few weeks I have mentioned mayflies, but they have not materialised in great numbers. I have seen a few duns on the Taieri and Mataura and even fewer spinners but not enough to get trout excited. Maybe it will happen this weekend, but I would not bet on it.

I was on the Mataura last weekend with a group of anglers from Christchurch, but the river rose rapidly on the first day and was even higher and dirtier on the second. But we did some casting practice, which proved worthwhile. One aspect we worked on was roll casting and Spey casting.

The latter is just a roll cast with a change of direction. Roll casting is the simplest of all casts but not used nearly enough. It helps the fly-fisher access places where the conventional cast could not place a fly. So if you want to be a better fly-fisher next season, learn to roll cast.

I had an outing on Mathias Dam this week on what started as a cold drizzly day that turned into a fine warm autumn afternoon. The fishing started badly. I had covered one spot for a while and leaving the fly in the water I walked along the shore only to have a trout take the fly. A smash take is the best description as that is what happened — the fly was gone. Must remember to keep the rod high when walking with the fly in the water.

Things could only get better after that and they did, with a nice brown and a fantastic rainbow coming to the net. The rainbow was in great condition. Then for quite a while I saw no rises and only had one take, which I missed.

Mid-afternoon I saw a rise and covered the area and eventually caught it on a water boatman. Thinking, or rather hoping, that there could be more fish there, I cast out again and was immediately into another fish. Several more followed.

One of these fish was a bigger version of the rainbow from the morning.

The timing of the afternoon fish activity, 2.30-3.30pm, is the time I would have expected mayflies to hatch and trout to feed on them in rivers. Catching them on water boatmen is just as rewarding. 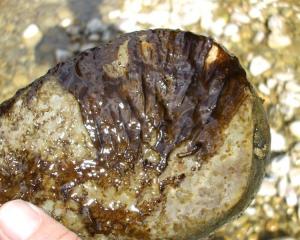