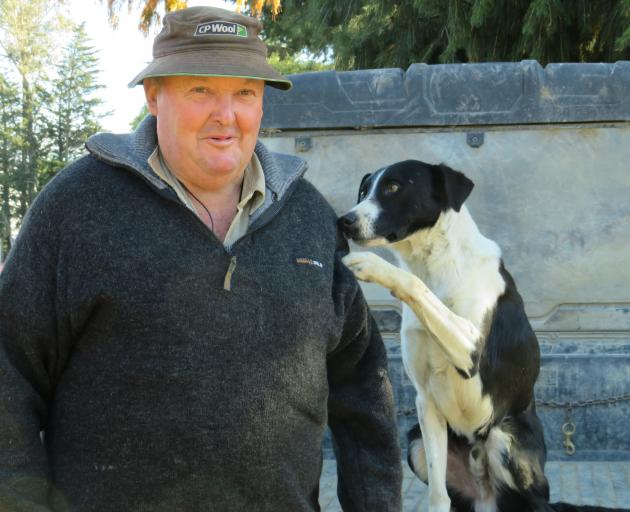 Mark Copland at home on farm with Don, after a successful dog trial season.
Mark Copland, sporting a new right hip and an extra one inch in height, let his 3-year-old dog Don do all the running during the recent national sheep dog trial championships in Southland.

He was on walking sticks, recovering from hip surgery.

A seasoned dog triallist, and past New Zealand representative, he got his new hip on March 8.

He had had many years of pain, but nothing like the six months before the operation, he said.

Mr Copland (62) was also in the Methven Collie Club’s team competing against Mayfield members the week before the operation when “the pain was unbearable,” he said.

Canterbury orthopaedic surgeon John Rietveld worked his magic on a well worn-out hip, which was crumbling during the operation.

“There was not much left,” Mr Copland said.

It had been a slow road to recovery but he has been given the all clear.

Mr Copland is a third-generation stud sheep breeder and he and his family operate Westmere Farming Company, at Dromore, just north of Ashburton.

They have been at the forefront of breeding development, in a constant bid to improve genetics on the Border Leicester stud started by Mr Copland’s grandfather, Henry, more than 85 years ago, and continued by his father, Derek.

Now, with dog trial season over he — and Don — were back at work on the farm at Dromore.

Mr Copland and his wife, Robyn, won the coveted Dakins Ambassador of the Year title in 2019 at the New Zealand Agricultural Show.

This year, they were looking forward to competing again in what will also be the New Zealand Sheep Breeders Association's anniversary.

The Coplands have been consistent prizewinners at the show.

Mr Copland took a few weeks to get back on the tractor following the operation.

His body certainly let him know if he had been standing for too long, he said.

Don is the offspring of Mr Copland’s 6-year-old bitch Deb and dog Cope, owned by the late Dick Carmichael, of Greta Valley.

Don had a win early on in his first competitive season last year, but still had a bit to learn, Mr Copland said.

“He’s quite an athlete ... always shown a bit of ability, but he’s still young and there’s room for improvement.”

The duo made it to the New Zealand championship long head final and only missed out on earning a title by a quarter of a point.

It came down to the call of judge Kent Ebbett, of Wyndham.

“It was the judge’s call. I respect that,” Mr Copland said.

The title was won by host club member Brian Dickison, a Greenvale Dog Trial Club member, of Waikaka, and his dog, Cole.

They will represent New Zealand in the dog trial team to compete against Australia in October.

That included points earned from the South Island championships at the same venue earlier in the week.

It was a great venue, almost purpose-built, Mr Copland said, of Sue and Alan Stewart’s Leithen Valley Farm, near Waikaka.

“The sheep were good from go to whoa.”

The Methven Collie Club will celebrate its 125th anniversary in March next year.