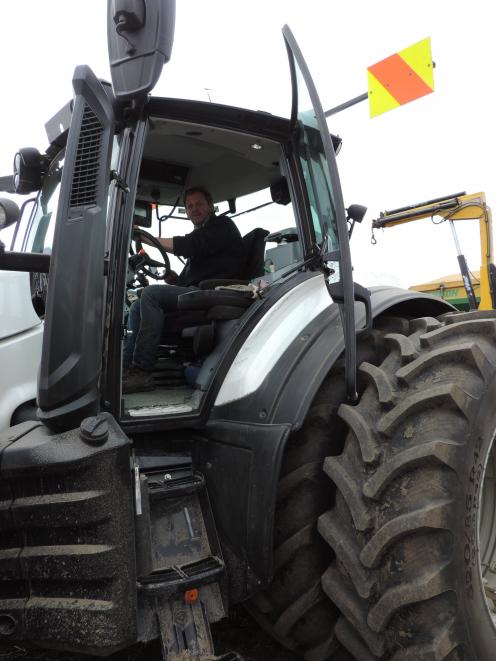 Dave McCabe from North Otago Ditching & Baling drills a crop near Oamaru last week. He said the ground was drier than he had ever seen it at this time of year. PHOTO: SALLY BROOKER
Rural contractors are facing a frantic season without their usual supply of migrant labour.

Merv and Jill McCabe started the business in 1990, and their son Dave now runs it with his father, covering the area from Hampden to the Waitaki River and inland to Twizel.

However, the few staff on hand would have to be careful not to over-exert themselves or violate the strict working time regulations that applied in their industry, she said.

"It’s terrible, isn’t it? Everyone misses out.

"The farmers all want their product made and there’s only so many hours in a day.

"There will be a lot of machinery sitting around in contractors’ yards."

But it may be getting too late, as they would have to get their documentation arranged and stay quarantined for two weeks before being allowed to join the workforce.

It was not possible to replace the Irish crew with New Zealanders, she said.

"You can’t just put someone on a tractor."

The work involved a high level of skill using sophisticated machinery. And much of the terrain the McCabes worked on was hilly, adding considerably to the risk and skill needed.

The family had only a couple of its workers available at present, Mrs McCabe said.

"It’s a quiet patch. They all used to come out in October."

She doubted the immigration situation would have changed by then.

"It’s a bit like going through a drought. It’s sad."

Rural Contractors New Zealand chief executive Roger Parton said the organisation lodged a submission with the Immigration Minister on August 14 to seek border exemptions for 206 agricultural contracting workers. He was still awaiting a response when Central Rural Life spoke to him.

Mr Parton said the lack of workers was likely to cause the loss of 28million tonnes of production, worth $110million, this season.

Then there was the "on-flow" of no feed for cattle or to help farmers affected by drought.

The contractors themselves predicted a 30% downturn in their turnover, which amounted to some $56million. They serviced about 8000 clients, Mr Parton said.

Safety was the first aspect that concerned him. Although untrained, inexperienced workers were not allowed to operate the contracting machinery under health and safety legislation, "we all know it’s going to happen", he said.

"The second issue is fatigue. Instead of working 18-hour days they’re going to be working 28-hour days."

Contractors were annoyed that migrants could enter New Zealand to work in the movie and horse-racing industries, but not for the sector the Government was depending on to trade the country out of the Covid-19-related recession, Mr Parton said.

They knew they would have to pay the costs of having incoming workers quarantined, but he hoped six-month working visas would start only after the isolation period had been completed.

Earlier this month, an Immigration NZ (INZ)spokeswoman told the Otago Daily Times it understood the effect Covid-19 and the border restrictions were having on some sectors and employers.

The bar for being granted an exception was set high to help stop the spread of Covid-19 and help protect the health of people already in New Zealand. "While we are empathetic to the situation some sectors and employers find themselves in as a result of the border restrictions, any decisions to ease the border restrictions must be based on what is best for all New Zealand."

INZ continued to listen to employers’ concerns, including the dairy and farming industry, she said.