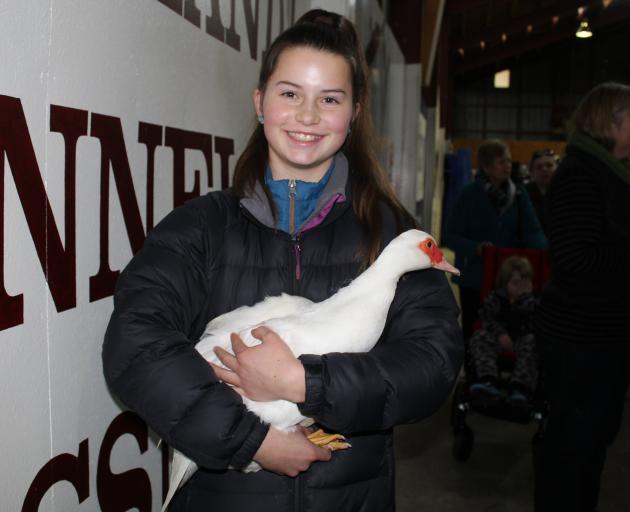 Invercargill Poultry and Pigeon Club member Hanna Lawlor (13) won titles for best under 12 months and best junior exhibit with her Muscovy duck at the club's annual show, held at the Kennington Kennel Club Hall in Invercargill on Saturday. PHOTOS: ABBEY PALMER
From Dorkings to Silkies, Wyandottes and Sebrights, two-legged feathered friends ruled the roost at the Invercargill Poultry and Pigeon Club's annual show at the weekend.

From as far north as Oxford, 37 exhibitors entered 485 birds in the club's 108th show, held at the Kennington Kennel Club Hall in Invercargill.

Five judges spent the morning examining exhibits as squawks competed throughout the room.

Crowds were queuing at the door by noon to see the show, which was open to the public from 1pm to 5pm.

Invercargill Poultry and Pigeon Club treasurer Jill Maxwell, who judged the egg competition, said she was pleased with the turnout after pigeons were banned. 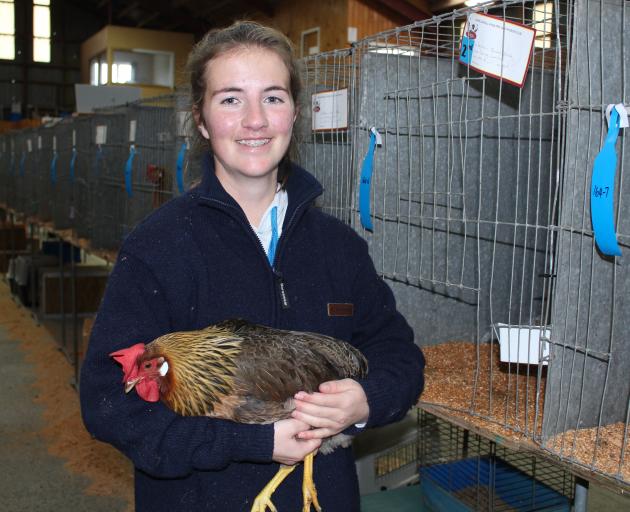 Invercargill Poultry and Pigeon Club member Denby Lawlor (18) holds her Leghorn Brown.
"There's no pigeons in any of the shows across the country this year because rotavirus - which kills - has made its way to New Zealand.

"We didn't think the show would be as big because of that but it's bigger than last year.''

Usually she would only enter three birds but this year she put in 10, "just in case'', she joked.

Ms Maxwell said the show was an opportunity to show off the birds and keep heritage breeds going.

"Because you can't import poultry we really want to keep heritage breeds alive - once they're gone they're gone.

Enthusiasts view the birds on show.
International judge Alan Jones, of Queensland, Australia, said the birds were judged by breed based on the NZ Poultry Standards.

"We look for colour, whether or not they have all their toes, as well as check they don't have any lice or diseases.''

There were three new categories this year - geese, turkeys and guinea fowl.