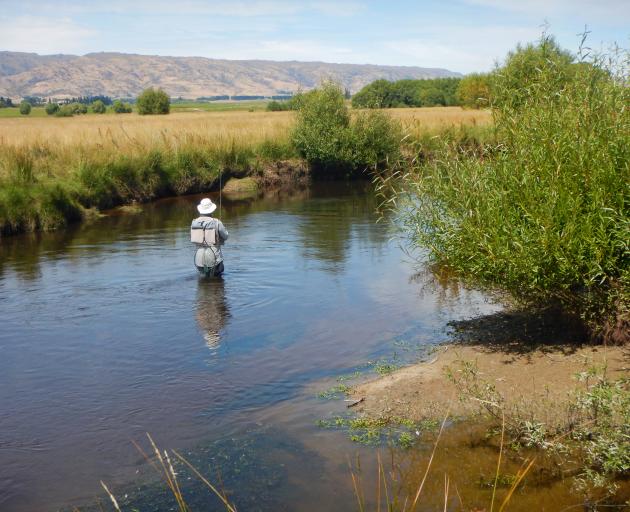 Murray Smart sues a diving beetle for a rising fish on the upper Taieri. Photo: Mike Weddell
With the recent spell of fine weather, most waters are at a level that would be considered normal at this time of year — good news for us anglers. The trout are feasting on willow grubs and, hopefully, in tussock lakes they will soon be feasting on cicadas.

The warm, fine weather is also good for a fall of mayfly spinners when it is calm. Warm evenings are also good for sedge fishing in both lakes and running waters.

The sedge rise typically takes place at dusk and on into darkness — an ideal time to slot in a couple of hours’ fishing that gives a good chance of a fish or two.

Recently Murray Smart and I fished the upper Taieri. There were spinners on the water for a while and lots of damsel flies. There were few rises to spinners and lots of rises to damsel flies. We fished diving beetle imitations and caught fish throughout the day. Using a fly that is larger than the predominant food forms often works well — presumably because the trout think they are getting a better return for their energy expenditure than they do when feeding on small items.

The one disadvantage of fishing a fly that does not imitate the predominant food form is that there are a lot of fish that follow the fly without taking it. However, over the course of a day enough fish will be caught to make it worthwhile.

On the Pomahaka there was a big fall of spinners. The first group of fish did not even look at my spinner imitation but three out of the four fish took a size 14 hare’s ear nymph. I did not find out what the other fish wanted. Further upstream there was a long line of willows with trout below them taking willow grub. Some took the hare’s ear nymph; others would not take it or a diving beetle or a willow grub imitation. A couple of fish were very suspicious following the fly on every cast, sometimes for several metres then turning away. They will be a challenge on my next visit.

This weekend I will be on the Mataura.