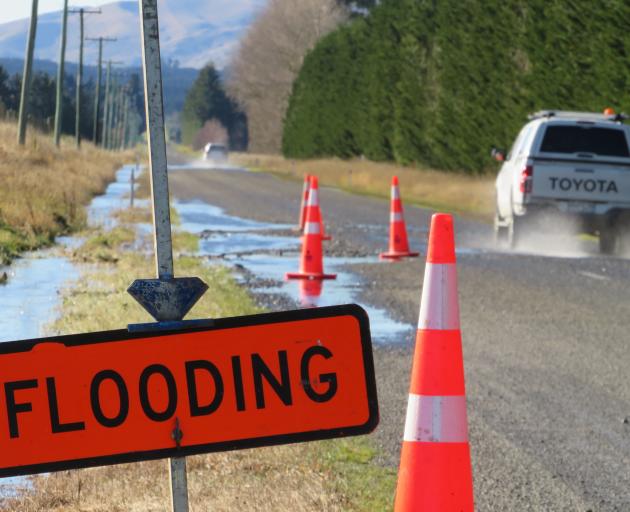 A sign warns of flooding on the Arundel Rakaia Gorge Rd, Inland Scenic Route 72. PHOTO: TONI WILLIAMS
Fix the roads, then put the rivers back "where they belong", is the call from Mid Canterbury Federated Farmers provincial president David Clark.

The flooding Canterbury-wide, which saw it placed into a state of emergency, now needs central government, district and regional council input so farmers can get back to managing their businesses.

"Farmers can’t begin their recovery with an active riverbed running through their property."

If some of that rubble could be removed from farms in the restoration of those river berms that would be good, Mr Clark said.

He said money had been provided for industry to access which would allow the co-ordination of projects to assist with recovery.

There had been an tremendous amount of materials and volunteers to help, but it needed extensive co-ordination.

Agriculture Minister Damien O’Connor visited the district with Prime Minister Jacinda Ardern, and declared an adverse event for flood-stricken Canterbury, unlocking $500,000 of government support for farmers and growers Canterbury-wide. It followed an initial contribution of $100,0000 towards flood relief.

"The money offered [by the Government so far] is a starting point but we have to be clear; that is not direct funding for farmers for the repair of damage," Mr Clark said.

"No government, whether red or blue, directly funds rebuilding fences or on-farm infrastructure or buying of feed or buying of crops. That doesn’t occur."

"So this is not a subsidy to farmers, and nor should it be."

He said farmers needed public assets reinstated to allow them to get on and manage their own businesses.

And whatever community help there was needed to be co-ordinated so it was focused and organised.

There had been regular communication across the whole sector, from those at farm level through to government, for understanding and to get issues rectified, including getting roading repaired and supply drops, he said.

Mr Clark had also been in daily contact with Ashburton District Council mayor Neil Brown and chief executive officer Hamish Riach, as well as Environment Canterbury flood engineers, which helped to get issues including roading and access sorted out.

"Both organisations have have been extremely responsive in sorting problems out. The community response across this whole thing has been outstanding."