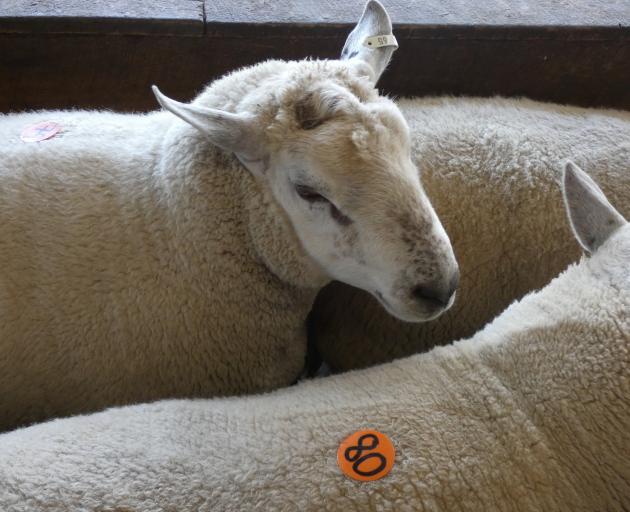 The dorbells (a Dorset Down and beltex cross) generated strong interest at Hermiston Letham Rams' on-farm ram sale at Mitcham. PHOTO: TIM CRONSHAW
Two Romneys each made $3000 to top the Letham family’s on-farm two-tooth ram sale in front of a packed-out wool shed.

Guy Letham and his sons, Cameron and Andrew, of Hermiston Letham Rams at Mitcham, north of Ashburton, were pleased with the near-clearance of Romneys, Dorset Downs, border Leicesters and dorbells — a cross between a Dorset down and beltex.

Cameron Letham said the rams sold well on the day, with prices at expected levels.

He said they were with happy with the strong turnout.

"It was great to see familiar faces and a few new ones. Some rams went down as far as Invercargill and as far north as Hunterville.

"If you can find a couple of new faces and the old faces are still there, you’re making some progress, I suppose."

The Romneys were first off the rank and bidding heated up to $3000 for lot 9, sold to Peter and Diane Lowe from Lynnford Romney Stud in Hinds.

The same price was reached soon afterwards for another Romney, bought by sale newcomers Freddy and Nikita Gane of Kaituna Ridges in Havelock, who are starting a stud. 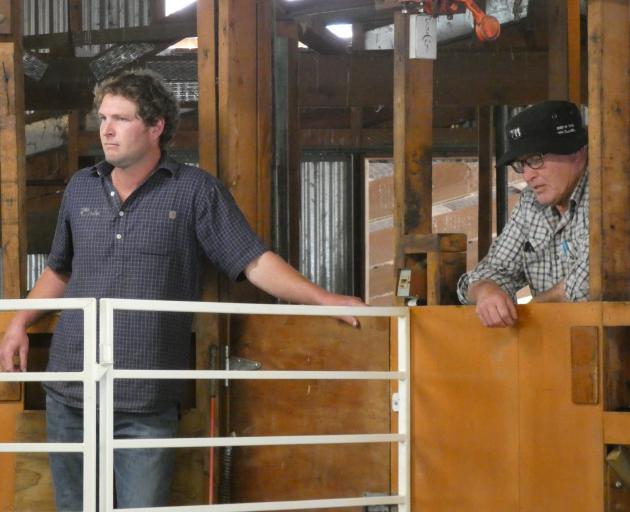 The dorbells (a Dorset Down and beltex cross) generated strong interest at Hermiston Letham Rams' on-farm ram sale at Mitcham. PHOTO: TIM CRONSHAW
Mr Letham said lot 9 was a "very correct" sheep with a quality 32 micron fleece and carcass and a one/one footscore.

He said this would have to be their best line-up of Romneys.

"That set the tone and the Romneys sold fantastically with a nice even line with a bit of grunt on them.

"We’re trying to get a fleece on them and despite strong wool being in the doldrums there’s hope things will turn."

The other breeds had a strong result with the top Dorset Down sold to Helen and Jim Lang from Waipara for $2000, and the dorbells made between $1000 and $1200.

Two stud border Leicesters sold for $1700 each to Hamish and Abby McKerchar from Shrimpton’s Hill in Cave and Duncan Scott from Wavering Downs in Timaru.

The border Leicester stud was started by Cameron’s great grandfather in the 1930s and the Romney and Dorset studs in the 1980s, while the dorbells are recent arrivals.

Mr Letham said there had been interest by commercial farmers in the dorbells because of their lambing results, along with the appealing carcass attributes of a top loin and back end.

He said buoyancy among farmers with the sheep and beef outlook and near-record prices had helped the sale.

"There’s a bit of positivity in the game and that makes it easier."