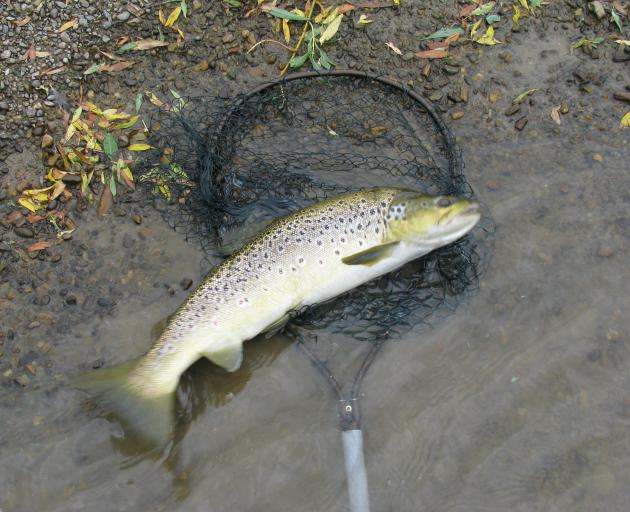 A prime Pomahaka trout taken on the nymph. PHOTO: MIKE WEDDELL
The fine weather continues but it looks like our luck will run out on Sunday, so if you intend to fish this weekend, Saturday is the day to go.

All waters are perfect so head for your favourite spot.

Recent clear nights have dropped the water temperature but it has risen a couple of degrees during the day.

Wading wet gives a rude awakening at the start of the day but is not too bad by lunchtime.

The Pomahaka is one of my favourite rivers and along with other rivers in the region had declined over the year with fewer insects and fewer trout but things are changing. Farmers on the Pomahaka have formed a water care group to improve the water quality of the river and already an effect can be seen in the clarity of the water.

Also, the gravel in the ripples is clean on the stretches I have fished this season and there are good numbers of nymphs on the stones and the fish are in good condition. Unfortunately, so far this year there have been two very big floods which has caused a lot of erosion, increasing silt deposition.

There is little that can be done to prevent big floods but silt load is being reduced by lower levels of run-off by farmers creating silt traps which have already reduced silt by many tonnes.

Nature is resilient and given this help from farmers the river should continue to improve. Farmers often cop criticism for damaging the environment but here is a group of farmers doing their bit for the environment, kudos to them.

I happened to fish the Pomahaka earlier this week.

The weather forecast was not too bad but afternoon northwesterlies were predicted.

The morning was promising especially when my feet thawed out but I saw very few fish and missed the only one that took my fly.

There were mayfly spinners on the water but no rises.

Just after midday I saw a couple of one-off rises which gave me hope. Shortly after I spotted a fish feeding on nymphs under an overhanging willow. After losing one fly in the willow and numerous hook-ups, the fish took the nymph and was landed at 1pm.

Immediately above the nymph-eating willow there was another fish feeding and it too took the nymph.

Then nothing for quite a while.

I thought of moving to another stretch when I got back to the car then I saw duns coming off and fished on.

I came to the tail of a flat and there were several fish rising every few seconds. Staying seemed the best idea.

The first fish would not take the nymph so I switched to an emerger and it took the first cast and so did several others. What looked to be a tough day turned out well in the end.