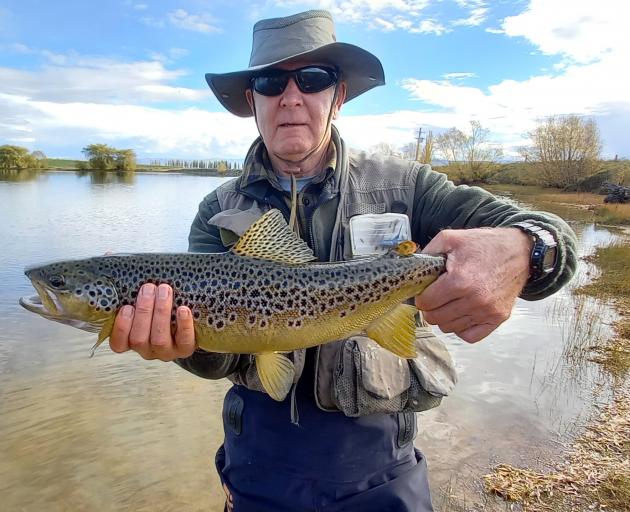 A good brown trout from Mathias’ Dam to end the season. PHOTO: CHRIS WEDDELL
Another season has come to a close, a season of extremes with big flood and drought.

At the same time, the Pomahaka had a flow of 498 cumecs at Leithen Glen, followed closely by another flood of 250 cumecs. Its previous high was 480 cumecs.

Remarkably, the Waipahi and other southern waters hardly rose at all.

The weather was at times unseasonable. For instance, I fished the Pomahaka on December 6 in fine, warm conditions while on December 11, I fished the Maniototo in snow and a few days later it was fine and warm on the Mataura. The snow day gave me some of my best fishing ever.

I made a point of fishing when there was a high-pressure system in place and not surprisingly this gave me the best two days fishing as far as numbers were concerned.

One day on the Taieri and the other on the Pomahaka.

The long period of low flows in the late summer and early autumn provided the opportunities to fish for trout rising to willow grub and the best of that was on the Taieri and the Pomahaka.

The lower Mataura was disappointing as far as rising fish were concerned and I only saw a good hatch of duns on one occasion but then I fished it three times well down on previous seasons.

Looking through my diary I see that I fished the Maniototo dams more than usual, especially in the early part of the season and in January when rivers were high.

This increased the number of rainbow trout I caught for the season and improved the average weight of trout caught considerably.

Fishing the dams also changed the hierarchy of effective flies for the season.

As usual, the hares ear nymph caught the most fish, which is not surprising as it is the fly I fish with the most.

Damsel fly nymph and water boatman were next best, not surprising either, as I fished the dams a lot.

One thing that struck me during the season was how few anglers I saw on the water.

Considering how good our fishing is here in the South a lot of licence holders are missing a great opportunity by not getting out.

This does not mean going out for a whole day and driving for miles. I have had good days on the water within 20 minutes of home.

Looking to the future, there are big changes in store for Fish and Game and if things work out as they are supposed to, we can look forward to even better fishing.

To take advantage of this I need to tie some flies and check over my tackle this winter.

This will be my last column until September.