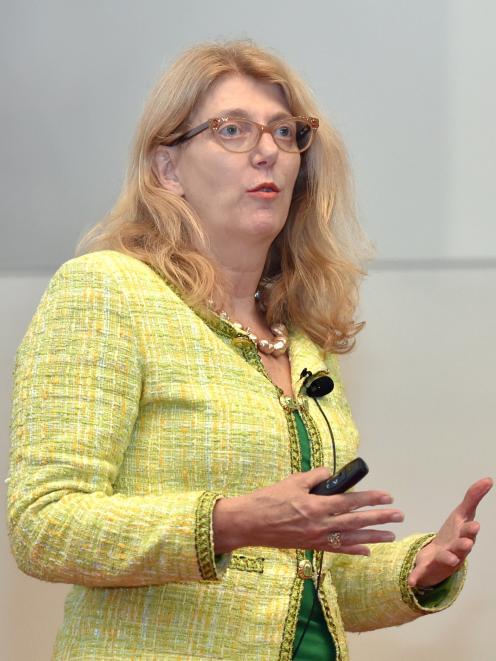 That was one of entrepreneur Melissa Clark-Reynolds’ messages during her closing wrap at a symposium entitled New Zealand Agriculture 2050 — Pathways of Innovation.

The event was hosted by Agriculture at Otago, an initiative launched in 2016 and involving more than 60 Otago researchers with active interests in agriculture.

The idea of the symposium was to bring farmers to Dunedin and have some of New Zealand’s leading thinkers on farming and food production give their visions for the future.

Ms Clark-Reynolds is a ‘‘futurist’’ of food and agriculture and also the first independent director of Beef + Lamb New Zealand.

She said she wanted people to eat less meat — but ‘‘way better meat’’ and that food needed to be produced with love so that flavour of love was evident in the food.

She wanted to hear conversations about ‘‘deliciousness’’; food needed to be made more delicious if it was to be a premium product and consumers — ‘‘who pay our bills’’ — needed to be listened to.

There were multiple conversations in New Zealand at the moment and one was mocking vegans — ‘‘and it doesn’t help’’.

New Zealanders ate about four times the World Health Organisation recommended levels for protein, while Americans ate about 10 times. As a futurist, Ms Clark-Reynolds believed protein was ‘‘the next sugar’’ and care was needed.

‘‘Should we be marketing protein or marketing food?’’ she questioned, while adding that food was a better way to be marketing.

She praised Silver Fern Farms, saying it had listened to customers. When it produced venison medallions, consumers did not necessarily know how to cook them, but putting a recipe on the back of the pack transformed it from meat to dinner — ‘‘dinner is worth a lot more to me than meat’’.

Ms Clark-Reynolds believed there would be growth in products being launched that spoke to specific communities, citing Ben and Jerry’s launch of a glyphosate-free ice cream. New Zealanders loved Round-Up, but she believed that would one day come back and ‘‘bite us’’.

She also believed the next consumer push was going to concern soil, saying there would be ‘‘huge opportunities’’ if soil made a product healthier for consumers.

New Zealand should be thinking how to lead a digital revolution concerning food, using the technology available to do that, she said.

NZX head of analytics Julia Jones said the best way to support rural communities now was to ‘‘help them adapt and fend off those that want you to stay the same’’.

‘‘Those trying to fight against change aren’t protecting you.’’

New Zealand had a strong reputation globally for its food but it needed to keep in mind that its reputation was only as good as the last batch of food it dispatched.

New Zealand was never going to feed the world, and it needed to be conscious of that — ‘‘we need people to buy our food a lot more than they need to buy it’’.

Consumers would drive more than any regulation could; most regulation was lagging what offshore consumers were driving.

Those consumers were looking for health and wellbeing, social impact, experience, and impact on the planet.

Because it was small, New Zealand could go into niche markets and it had to be careful how it treated its people and its animals. It needed to tell the truth and earn trust.

New Zealand itself was not the story — ‘‘everyone has scenery’’ — instead it was a platform for multiple stories, she said.

Ms Jones encouraged people to embrace diversity of thought, never be afraid to try, fail, learn and change and celebrate failure and success.

Emeritus Prof Frank Griffin, one of the drivers of Ag@Otago, said New Zealand could ‘‘have it all’’ if it was smart.

Alternative production systems and new technologies could get it there, where it could gain a lot more value from a lot less produced.

Silicon Valley’s interest in synthetic foods had spooked traditional food producers but a reality check was needed — those foods were not natural. Natural food was expensive so it had to gain value in the future, he said.

Associate Prof Miranda Mirosa outlined the ‘‘shocking’’ statistics on food waste. About one-third of all food produced on the planet was not eaten, which equated to 1.3billion tonnes globally a year.

That waste occurred all along the value chain and everyone was responsible.

Globally, food loss and waste amounted to economic losses of $940billion a year. While reducing food waste would reduce world hunger and environmental degradation, there was also a convincing business case for a reduction.

Co-ordination and collaboration were key in tackling the issue and there were some very positive signs that New Zealand industry was wanting to collaborate.

Some sort of national level strategy would be very helpful for finally getting some baseline data and then some co-ordination concerning action.

The University of Otago was in the process of launching a research theme on food waste, she said.

The WHO's daily recommended intake is 0.8g protein per kilogram of bodyweight.
This recommendation is given for sedentary adults. This level of protein of consumption is estimated to prevent deficiency in 97.5% of the population. In other words, the WHO's recommendation is the amount required to survive, not the amount required to thrive.
It's generally accepted within the bodybuilding & strength training community that 1g per pound of bodyweight is a good target for optimal muscle protein synthesis and recovery. The avg Kiwi male weighs approx. 85 kgs. Therefore the WHO suggests ~ 70g per day is sufficient for the avg kiwi male. The 1g per pound rule suggests that approx 190g of protein per day would be a better number to shoot for. This is nearly triple what the WHO recommends.

2.
"As a futurist, Ms Clark-Reynolds believed protein was ‘‘the next sugar’’ and care was needed."

That's a ridiculous statement to make... I'd like to see some citations to back that up....