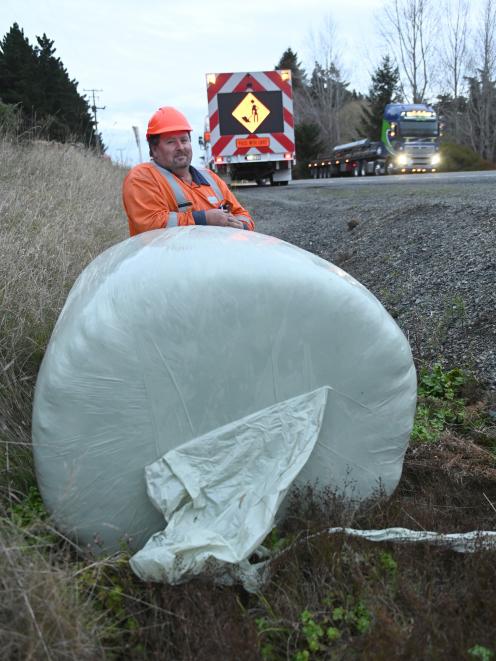 Traffic management specialist Stuart Hewson with a bale of baleage which fell from a truck on State Highway 1 north of Waitati yesterday. PHOTO: LINDA ROBERTSON
A Dunedin traffic manager is flagging an increase in hay bales or baleage falling off trucks as a potential risk to road users.

Traffic management specialist Stuart Hewson, of Dunedin, said he was aware of three bales which had had fallen off the back of trucks in the space of a week.

A feed shortage in Southland meant farmers were trucking in "huge amounts" from elsewhere in the country.

The bales posed a serious risk to road users because they weighed up to two tonnes.

Lost bales also risked leaving truckers and farmers out of pocket, as a single bale would cost between $100 and $120, and nearly as much again much in haulage.

He believed there were hundreds of southbound bales on Otago’s roads each day.

The bales usually started their journey’s secured with single 2.5-tonne strop, which could slip off as the bales moved around when they were jostled in transit.

"They do loosen, they can slip off because they’re round," Mr Hewson said.

Because the bales were usually secured in pairs, if one fell off, the other would be likely become loosened too.

Fortunately all the bales which had fallen recently had gone off on to the left-hand side of the road.

But if one went to the right it could be "real hazardous", Mr Hewson said.

Late last week, a bale had burst on a wire barrier between Karitane and Waikouati.

Mr Hewson was doing a patrol for a nearby work site when he came across the scene which required a clean-up crew from Downers, who were notified by Waka Kotahi NZ Transport Agency.

The other two he was aware of were on Wednesday. One was near Porteous Rd on SH1 near Evansdale. That bale was intact. The other had dropped off on the same stretch of road, near Merton. That bale had split and it was picked up by a local farmer yesterday.

Mr Hewson said the bouncing bales were the type of thing that happened from time to time, but the issue was much more prominent with the sheer volume of feed being trucked in.

His crew was keeping an eye on trucks coming through, and instructing them to secure their loads properly if needed.

His message for truckies was to check their loads every hour or so.

He also wanted all road users to slow down around roadworks, as his team had encountered four trucks doing 70kmh in a 30kmh zone in the past week.