You might think Tarras farmers would be whooping with joy that years of legal wrangling over the Lindis River could finally be over.

Instead, Alastair Rutherford feels it is a "hollow victory" after a High Court decision to dismiss Otago Fish and Game’s appeal against a 2019 Environment Court decision to set the minimum flow at 550 litres per second and a primary allocation of 1640l/s.

"We still can’t get excited about it. For all the effort and time and energy, it’s still got a sour taste," Mr Rutherford, a fourth-generation farmer, said.

Citing what it described as errors of law in the decision, Fish & Game wanted the minimum flow left at the higher level of 900l/s per second and a primary allocation of 1200l/s.

Water from the river is used by 35 Lindis and Ardgour Valley water users, including the Rutherford family from The Point, the Gibson family from Malvern Downs and the Jolly family from Ardgour Station.

Lindis Catchment Group chairman Bruce Jolly and members Robbie Gibson and Mr Rutherford recently outlined the protracted battle the group had undertaken to ensure the families it represented would continue to have access to reliable irrigation water. 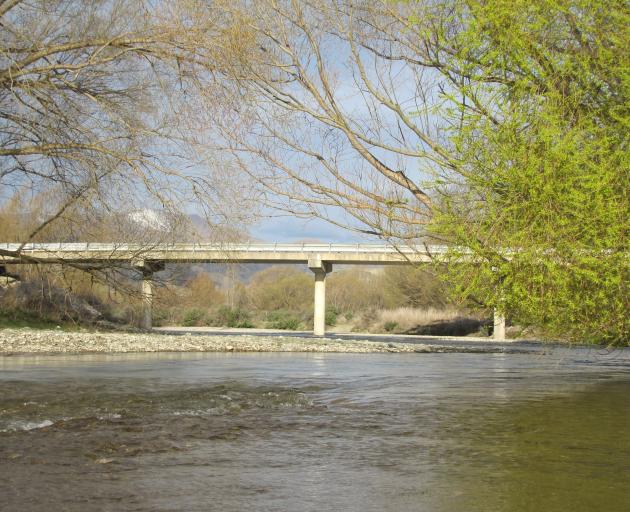 The Lindis River. Photo: ODT files
It came at a financial cost, which the group estimated at more than $900,000, but the personal toll was just as hefty.

The trio talked openly of their frustrations, and of what they describe as conflicts of interest, a lack of science, knowledge and facts during their subsequent battle with the Otago Regional Council and then Fish & Game — a "total breakdown in due process" by both organisations — and of being made to feel like "thieves" in court.

Mr Jolly rued how there were "so many influences" getting a strong say in the future of rural communities yet many were "completely removed" from those communities.

"They have no skin in the game," Mr Rutherford added.

Traditionally low rainfall and often high temperatures in the lower Lindis catchment meant the flatter land had long relied on irrigation to provide supplementary feed and stock grazing; it was critically important to the economic viability of those properties.

Irrigation was applied to a small area of the Rutherford family’s property but it was the engine room on the intergenerational land.

"It was my ambition to secure water for my family. To me, this whole process and the way the RMA [Resource Management Act] works is just so destructive," Mr Rutherford said.

"Really we’ve the best conservators you can have because you can’t rape and pillage your livelihood. All we’ve tried to do is make it better for the next generation," Mr Gibson added.

Mr Jolly, whose family has been in the area for five generations, said irrigation provided stability and security, and an ability to predict what was going to happen year to year.

It was April Fool’s Day 2014 when the ORC hosted a meeting in the Tarras Hall with the local community and interest groups about a possible minimum flow and allocation regime for the Lindis River.

Many were not happy with the proposed minimum flow of 450 litres/second but those on the LCG committee realised it was a reasonable offer — "at the end of the day ... everyone’s got to make compromises," Mr Gibson said.

It had taken time to get a united voice but the community was eventually in agreement.

A year later, "out of the blue, with no rhyme nor reason", another public meeting was held at which the ORC announced the minimum flow would be 750l/s — and that was when it all began.

The LCG appealed and a weeklong hearing was held in Wanaka in 2016, and Mr Gibson believed there were conflicts of interest involved in the panel.

In what was understood to be a close vote, the ORC later adopted the panel commissioners’ recommendations: to increase the summer minimum flow to 900l/s and the primary allocation limit to 1200l/s.

Again, the LCG members were concerned about possible conflicts of interest.

The LCG was "horrified" and instantly appealed what Mr Gibson described as a "farfetched" decision which would have meant irrigators did not have water for about 70 days a year.

The matter went to mediation and subsequently to the Environment Court.

"We wanted court. In the end, the judge closed it earlier ... we had them nailed.

"More or less we produced all the same evidence that was produced when we went to hearings that was taken no notice of. It comes out we had won absolutely everything in ... court," Mr Gibson said.

A pivotal moment for him was when resource management consultant Dr Brent Cowie produced his evidence — that was when he knew they could win it.

Dr Cowie, a freshwater ecology specialist, said the commissioners’ decision understated — "sometimes almost to the point of dismissal" — the effects of the recommended low flow on those in the community who relied on the river for irrigation.

In doing that, it relied in part on information now known to be flawed, and made statements that were "rather impracticable".

He believed the commissioners had put too much weight on safeguarding the life-supporting capacity of the river, and too little weight on the social and economic needs of the community.

In his ruling in 2019, Environment Court Judge Jon Jackson set a minimum flow for the river of 550l/s and a primary allocation of 1640l/s, which were the limits proposed by the LCG.

The LCG hailed that decision; at the time Mr Jolly said "hopefully, this has got to the end of it", while Mr Gibson memorably described it as Central Otago’s "Erin Brockovich moment".

But it was not the end.

Fish & Game appealed the decision — that appeal was dismissed by Justice Rob Osborne earlier this month.

It would be fair to say that Fish & Game was not top of the trio’s Christmas lists — if people buying hunting or fishing licences knew "half of it was going into litigation", they might not be so keen, Mr Gibson said.

The amount of costs paid by Fish & Game to LCG had been settled and was subject to a confidentiality agreement.

Mr Rutherford reckoned Fish & Game "just shouldn’t be there. They are making money out of an introduced pest. They still answer to Doc [the Department of Conservation]. I don’t know why Doc puts up with them" — while Mr Jolly believed it was abusing its position.

Mr Gibson said the experience the catchment group had been through was a good example of what was wrong with the Resource Management Act.

"For a bit of water, if it’s at the expense of the economy of a little rural community, we’re buggered," he said.

"It’s frightening what could happen if we let them away with it. We had to fight this as a little community."

The trio acknowledged that it had not just been a bunch of farmers fighting alone; they surrounded themselves with a "very good team", which included former ORC staff.

Key to their victory was former ORC chief executive Graeme Martin, who acted as an unpaid advocate for the group.

"If it wasn’t for him, we were buggered. We are indebted to him because he said, ‘you’ve got a case, it’s not fair’.

"He took it as a crusade. When we got kicked in the guts from the hearing, he said, ‘if you produce the proper science and facts, you’ll win’.

"We stuck with that, he was dead right," Mr Gibson said.

"Our community owes him everything."

Mr Gibson said the debates going on about water meant the odds were stacked against farmers, yet the benefits of irrigation were a "no-brainer".

On Malvern Downs, the fourth-generation Gibson family used to run about four sheep to the hectare, but now it was about 22. They had also got a lot more efficient with their water use.

"It’s a hollow feeling but it’s quite exciting now, the next generation have got something to look forward to, a 35-year water right. We’ve done all the hard yards," Mr Gibson said.

His grandfather was among those responsible for putting in water races in; schemes were sponsored to give work when the gold mining boom stopped, to bring people to the area and encourage community growth.

The unspeakable up against the insufferable.

No mention, of course, of "the social and economic needs" of the sheep. Invisible as usual.

Congratulations to the Tarras farmers.
"if people buying hunting or fishing licences knew "half of it was going into litigation", they might not be so keen"
True and it's just one example.
The same applies to our ORC & DCC rates as well as our our taxes.
People need to be a lot more aware of who they vote for or employ in positions of power, although hidden agendas are not obvious to see nor understand at first.
As a population we need to be a lot more politically aware because it's not all right here.
There is something rotten inside those seeking power in our time
I get the sense they don't like our society or even humanity !

These entitled farmers seem to think that its perfectly within their rights to take as much water as they want for their (over) stock levels regardless of the natural condition of low rainfall in the area.
Come hell or low water their profits are sacred. Enough is never enough is it?

It is fascinating to try and understand the reasoning and psychology of many Kiwis and Fish and Game. They will go to extremes to protect the ecology of rivers to protect trout with little regard to the economic impact on the communities affected. Native fish tend to thrive and survive in low flow conditions. Like the possum, trout are not indigenous to NZ. However, unlike the possum, trout have completely destroyed many natural habits and caused the extinction of some native fish species. Only a remnant of NZ fish survive and these are threatened by trout! If people want to take conservation seriously then we need to rid our rivers of these invasive pests. Fishing is a bit like smoking dope; people who do it think it’s great, but thinking people know better?

Wha ?! Not sure if Erin would agree there....being as her battles seem to have been against Environmental Polluters/Contaminators etc;

I also wonder how she would feel being name dropped by a group who see nothing wrong with sucking water out of an at times, (very) marginal waterway to irrigate ground, growing plants that really would not survive in our ever increasingly heating Planet.

Because their Grandfathers did it.......

Well heres a thing, why not try something New? Innovative ! Grow Plants that CAN exist in the Climate. Without killing the River.

Grandfathers didn't do it ... they managed without it, and enjoyed some great recreational fishing at the same time.

Tarras, like a lot of other areas in NZ, doesn't get the rainfall to "grow" anything substantial - read as $$$$ to the farmer. So our rivers will dry up, and sooner or later, the water will disappear completely. Then the farmers will say how hard it is to live in their $1m farmhouses - poor cockies" used to be a popular term - so the land will be sold off to developers for "lifestyle" blocks, the farmers will still make millions, and the average Kiwi guy who wants to go camping and take his children fishing ... well really, who gives a bulls backside ??