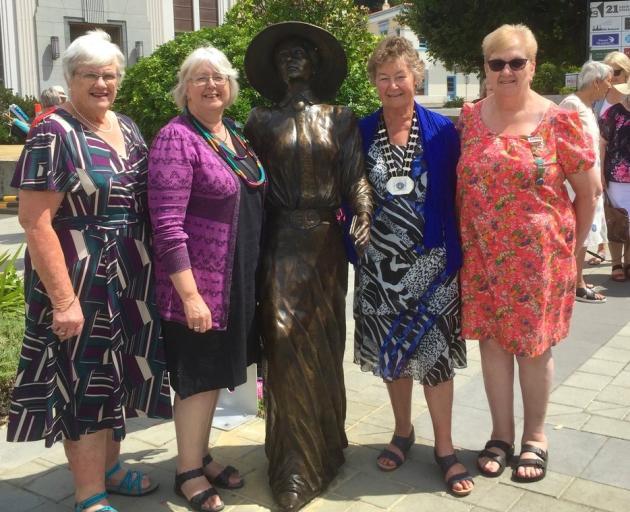 A life-sized bronze statue of the historic figure — standing 5ft 3in (1.6m) tall — in mid-stride across the pavement was unveiled as a tribute to the centennial anniversary of the organisation in New Zealand.

Mrs Vaughan, who is also on the national executive committee, said about 250 WI members nationwide had made the trip to Napier on February 12 for a weekend of anniversary celebrations.

"It was a joyous occasion and a fitting and apt ending to the long weekend," Mrs Vaughan said of the unveiling.

Members enjoyed the weekend of events and were pleased to have attended the once-in-a-lifetime occasion, she said.

There was a meet and greet at Napier Girls’ High School where Miss Spencer was headmistress from 1901 to 1910, a trip to Omatua homestead, where the first WI meeting was held in February, 1921, and a graveside visit to and Kowhai tree planting at the resting place of the founder.

It is a "beautiful setting under an old oak tree", she said of the graveside.

A church service with the congregation of Waiapu Cathedral of St John the Evangelist, led by the Rev Dorothy Brooker, was followed by a procession to the unveiling of the bronze statue of Miss Spencer, across from the cathedral.

Mrs Vaughan was honoured to carry the Rissington WI banner.

"It is not the original one ... that is hanging in Omatua," she said.

"National president Fay [Leonard] carefully unwrapped the teal cloth that covered the bronze statue, to a round of applause and cheers from the onlookers."

It was commissioned by sculptor Gerard McCabe and blessed by Ms Brooker along with Hawkes Bay Minita a Rohe o Matau a Maui, Archdeacon in Charge the Ven Numia Tomoana.

launched the first WI at Rissington, Hawke’s Bay in February, 1921 after being introduced to the Women’s Institute of England on a visit to London.

She was so captivated by the concept of the WI she was sure the organisation would be beneficial to country women in New Zealand.

In 1925, there were six WIs in the Hawke’s Bay area and now there are more than 4000 members nationwide.