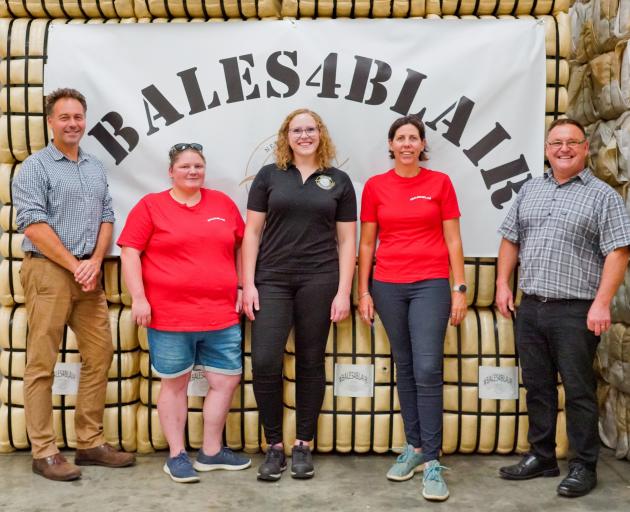 Bales4Blair was launched in memory of Winton man Blair Vining, whose petition to create a national cancer agency was signed by more than 140,000 New Zealanders.

The wool was given by farmers to be made into insulation for the new Southland Charity Hospital.

The initiative was started by Mrs Blaikie, who pitched the idea to a couple of friends, Eastern Southland farmers Brooke Cameron and Sarah Dooley.

Nearly 400 bales of wool have been given by 174 farmers from throughout the South Island, and some from the North Island, amounting to about 65,000kg of wool.

The project was supported by local and national wool merchants, wool brokers and manufacturers, the wool being sent for scouring at the Canterbury Woolscourers plant in Timaru.

Canterbury Woolscourers is a subsidiary of New Zealand Woolscouring Ltd, which donated its services to the project by co-ordinating, scouring and arranging the processing of the wool for no charge.

From the plant, more than half the wool would be shipped to Christchurch, where wool insulation company Terra Lana would process the wool, again at no charge, into 100% wool batts to insulate the hospital, New Zealand Woolscouring chief executive Nigel Hales said in a statement.

Due to the "overwhelming" response from farmers, the additional wool had been bought by Godfrey Hirst and the proceeds amounted to a "significant" donation to the hospital.

That wool was destined for the company’s Oamaru yarn-spinning plant to be used in carpet manufacturing.

The wool grease from the wool would go to an international refiner to be further processed and highly refined to become cholesterol, and then vitamin D, Mr Hales said.

Mrs Blaikie said she was overwhelmed by the generosity that had been shown towards the initiative.

She is a staunch advocate for wool; last year she delivered a petition to the steps of Parliament calling on the House of Representatives to ensure all publicly funded buildings and KiwiBuild homes were built or refurbished with New Zealand wool carpet and insulation. It was signed by 15,069 people.

During her trip to Canterbury, she took the opportunity to visit others involved in the wool industry, asking for their thoughts on its future and what needed to be done.

Fleece wool and second-shear types attracted the most interest from a full bench of buyers.

Crossbred fleece was up to 10% dearer, while second shear was up to 9% higher.

The extra buying pressure was made "even more remarkable" given the strengthening New Zealand dollar.