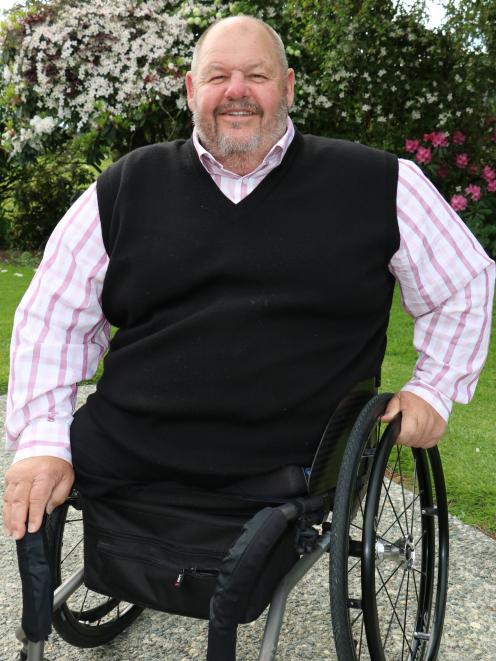 Motivational speaker Tony Christiansen speaks at an evening hosted by the Southland Rural Support Trust in Gore last week. He told the audience about his life and how he had overcome the challenge of having his legs amputated as a boy. PHOTO: SANDY EGGLESTON
Considering doctors predicted he would be dead by the time he was 20, Tony Christiansen has packed a lot of living into his 62 years.

At age 9, Mr Christiansen was dragged under a shunting train in a railway yard. His legs could not be saved and were amputated.

Mr Christiansen said those in the medical profession believed he would not cope with the consequences of his injuries and would end his own life.

"The pressures of life with these horrific injuries would be so great," Mr Christiansen said.

Fortunately, his parents treated him no differently to his brother and sister and once he recovered, he resumed life to the full.

"I was out climbing trees and down the gullies with all my friends.

"I had a great bunch of mates and I think this is where I got this independence from."

It was important to make peace with the fact life was not fair, he said.

"I was run over by a train when I was 9 years old.

"For that I have no choice.

"It’s what you do about it that makes the difference."

Mr Christiansen set goals for himself including being able to fly an aeroplane, to represent New Zealand in the Paralympics, to be a successful businessman and to compete in motorsports.

He had also climbed Mt Kilimanjaro, in Kenya.

"Having this disability in my life has probably opened more doors and opportunities than I may have had if I had been able-bodied.

Attitude was a very important factor in how successful people were in life, he said.

"I know many able-bodied people who are far more disabled than I will ever be.

"It’s simply because of their attitudes to life."

People tended to look at him and conclude his life "must suck".

"I actually have an extraordinary life. I have that life because I choose it to be that way.

"If you have the will, you will always find the way."

He hoped sharing his story would encourage others to set goals and create their own story.

"Everybody’s got a great story."

However, often people looked at circumstances as problems and allowed the problems to stop them from living their own story.

"I look at them as challenges.

"One of my biggest issues I have in life is the harder things are to do, the more I want to do it.

In his experience, rural people tended not to share their stories with each other.

It was important they did, because then they would realise other people faced the same problems as them, he said.

"The greatest thing you can do is to communicate and share your story."