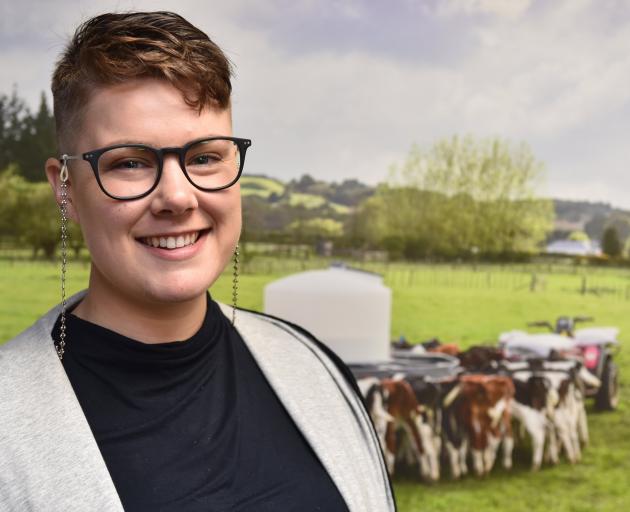 Next Farm brand manager Sammi Stewart wants to encourage young people to follow in her footsteps. PHOTO: GREGOR RICHARDSON
Working in farming doesn’t always mean driving the tractor, herding the sheep or milking the cows, says Next Farm’s Sammi Stewart. She talks to business reporter Jacob McSweeny about her hopes to inspire younger generations to realise the types of futures available in the agritech sector.

Sammi Stewart wants to get kids back into farming but she does not mean chucking on the gumboots and getting up early to milk the cows.

‘‘I grew up on a farm in Southland so my parents had a sheep and beef farm and when you live in rural Southland you either milk cows or shear sheep,’’ said the brand manager of Dunedin start-up Next Farm.

For Ms Stewart, it was not until she worked for Next Farm that she realised the possibilities a career in agriculture could open up.

"Agriculture never seemed like a path I wanted to take ... I really only thought of it as working on the farm or for the likes of a Farmlands or PGG.

"A lot of kids will be the same.

Agritech was one of the fastest growing industries in the world behind fintech, or financial technology, Ms Stewart said.

She wanted to change young people’s preconceptions about the types of work available in agriculture.

"It takes all of the on-farm sensors, whether that’s the likes of a soil moisture probe or a weather station.

"We take all of those different data points and we feed that through our software and decide when and where and exactly how much to irrigate based on the crop to improve the farm’s yields."

Ms Stewart wanted the chance to talk to high school pupils about working in agritech.

She said she had offered her services to some schools but was yet to get a response.

"There’s so much more to farming and agriculture than milking a cow, which is a great job in itself.

"There’s so many other ways you can play a part in feeding the world."

There would also be a large population, especially around the Otago and Southland regions, of children who grew up in a farming environment with an iPad or smartphone never far from reach, she said.

"The other side is there’s lots of kids that grew up on the farm that have the farming experience that want to get into software design or drones.

"Having the farming background means you can develop the product and a solution that’s actually going to meet the farmers’ needs because your aware of what they need."

She said Next Farm was always looking for good staff but it was not easy finding them.

"A couple of months ago we were looking to hire a couple of tech people and very few had had any sort of agricultural background.

"For the most part no, there does seem to be a big gap between technology knowledge and the actual, practical applied use of it in the agricultural space."

In December Next Farm installed 1500 of the new season’s version of its irrigation controller, after having put 500 beta versions out in Central Otago last year.

It expected to close a fundraising round early this year, and would attend the evokeAG conference in Melbourne in February to build up more contacts, with a view to pushing its products in Australia.