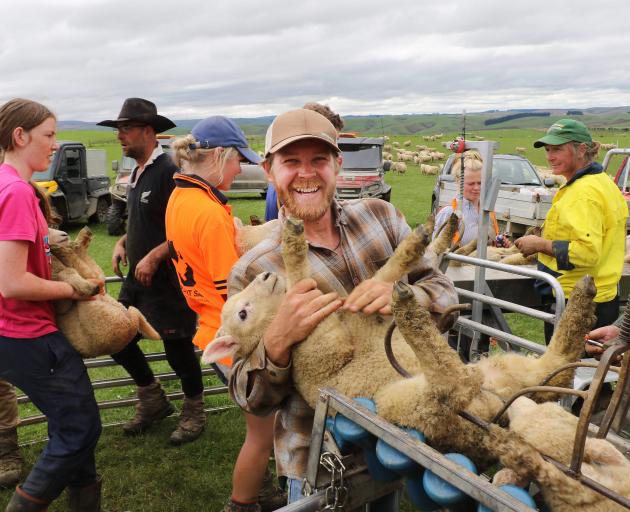 Former fishing boat skipper Cody Meares, of North Carolina, places another lamb into the chute for its turn to be tailed, castrated and vaccinated. PHOTO: JOHN COSGROVE
Tailing or skippering boats.

These two activities couldn’t be further apart, but for Cody Meares, of North Carolina, they are just another in a growing series of life’s adventures he has clocked up on his extended journey around New Zealand.

Cody (30) has traded the vast emptiness of the Pacific Ocean, skippering fishing charter vessels chasing snapper and trevally in the deep seas off Hawaii, for the rugged high country back blocks of the Lawrence /Waitahuna area.

One of thousands cast upon the shores of Aotearoa by the Covid-19 lock down in March and April, Cody said when he heard the lockdown was happening he didn’t panic.

"All I did was call up some Kiwi mates I had recently travelled around Australia with and they said ‘sure mate, come and stay with us’ and that was it."

That, he said, was a big difference between his home town of Calabash, North Carolina, and New Zealand.

"Everyone here tells it like it is, no one is afraid to speak because they might offend someone or be offended by what is said or it isn’t politically correct. Here they speak their mind and if you don’t like it, move on."

After the lockdown eased and months of working as a hammer hand on building sites up north, Cody came to the South Island for a chance to hunt red deer with his bow in the Southern Alps, and to hike the Great Walks.

"Covid shut me down and I missed the roar, so I still took a chance and came south, Wwoofing [World Wide Opportunities On Organic Farms] as I went along.

"I’m currently with Jimmy and Genevieve Crawford on their 1214ha hill country farm at Waitahuna, near Lawrence.

"Jimmy said they were going to help the local gymkhana club tail some sheep further up country on the nearby 12,556ha Pamu Farms’ Waipori Station and [asked if I] would like to come along.

"What an experience! – 8000 lambs docked, castrated and vaccinated in just two days by around 50 people, it was great to see so many people had volunteered their time to raise money for their community."

Cody had never seen tailing before. He grew up on his family’s 80ha tobacco growing plot on the outskirts of Calabash.

"When I sent the photos home of me tailing, my mum and dad were shocked and wanted to know more about what I was doing there.

His father is a nuclear electrician at a nearby power plant and his brother is in construction.

"It was a big shock to them, but I told them it’s all part of the real Kiwi experience and I’m glad I took part as it was really cool.

"The people there made me very welcome and guided me along as I learnt how to tail lambs."

Cody said Lawrence was so different from his home town of Calabash, a popular seaside summer resort six and a-half hours drive south of Washington DC, which prides itself on "Calabash style" a distinctive style of fried seafood.

"Calabash was popping during the summer months, but dead during winter so I left in my early 20s, not knowing what I would do. I travelled to Alaska, then worked on fishing boats in Hawaii for six years.

"I love fishing but I needed a break from it, so I travelled to Australia and New Zealand.

"People here are so open and friendly. I’ve discovered Fiordland, it’s a place that’s just so beautiful and peaceful. I think New Zealand’s like the states was in the early 80s, except more open minded.

Cody plans to stay in New Zealand for a while longer working on farms and orchards before (if the pandemic lets him) he returns to skippering boats for fishing charters or TV reality show productions in the South Pacific.