Australian pair are here to learn 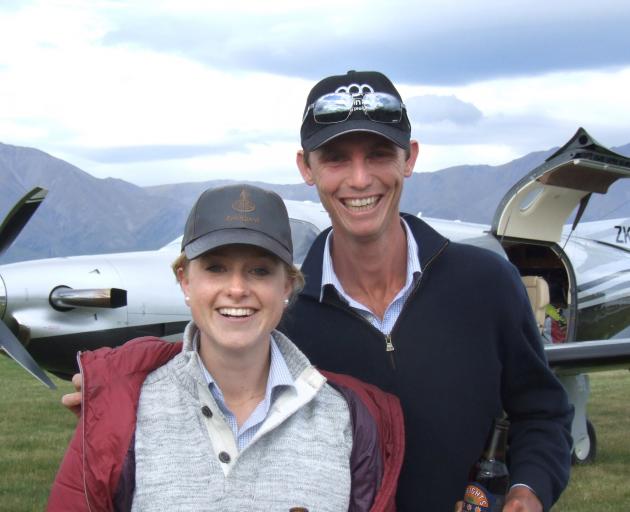 The Australian pair flew into the Waitaki Valley township on a Pilatus aircraft that had been chauffeuring them around the country on a mentoring trip, as part of their prize package.

The Australasian agribusiness award was launched by the Platinum Primary Producers (PPP) Group in 2014, in memory of Australian beef industry leader and PPP foundation member Zanda McDonald, who died in 2013 after an accident at his Queensland property.

The award — which had been driven by PPP founder Shane McManaway — was centred on helping agriculture’s future leaders further their career paths for their own personal development, as well as for the benefit of the industry.

Both down-to-earth and engaging — and from opposite sides of the beef industry — the pair were relishing the opportunity to learn more about New Zealand farming systems.

Passionate about genetics and genomics, Ms Landmark is co-ordinator of the Northern Genomics Project at the University of Queensland, where her work focused on improving genetic selection and reproductive technology. It meant she worked with beef producers, beef extension officers from state governments, consultants, vets, university researchers and scientists.

She co-ordinated the programme, which involved about 30,000 head across 54 properties in Queensland, the Northern Territory and Western Australia.

The goal of the project was to develop a DNA test that was suitable for northern Australian cattle, and achieve widespread adoption.

Born in Mt Isa, northern Queensland, to a mining family, she grew up moving "around the globe" and initially focused on Aboriginal studies, having missed out on getting into veterinary science the first time.

Always interested in animals, from the age of about 6 she either wanted to be "a Spice Girl or a farmer", she quipped.

During a period in which she deferred her degree, she worked on a cattle station in the Northern Territory and while she initially found it very tough — "I didn’t know anything; everyone came from an ag background and I was straight out of the city" — but she soon fell in love with agriculture.

Her veterinary career initially involved mixed and dairy practice and beef extension work; she got sick of cats, dogs and horses — "basically anything other than cattle" — and that led to her starting ovarian scanning in cattle.

While she never thought she would be involved in research, the Northern Genomics Project was hugely rewarding, as she saw how it could change the industry.

When it was suggested she enter the Zanda McDonald Award, she did not think what she was doing was particularly impressive.

"Who else is excited by data, seriously?" she laughed.

By the time she had been shortlisted and was down to the final three, Ms Landmark was also nine months pregnant.

The day after she and Mr Evans received the award, she and husband Luke, a builder, welcomed baby Fred.

Describing herself as "a bit of a workaholic", she even did some radio phone interviews from hospital.

She had not stopped working since Fred’s arrival, but she was fortunate she had a very flexible job and Fred was also a very "chilled" baby.

He and her husband had accompanied her on the New Zealand trip and Fred had become so well known that if she turned up at a property without him, people were disappointed, she laughed.

He was born in Cobar, a town in western New South Wales, which was a predominantly a sheep and goat grazing area. His father worked for stock and station company Elders.

The family moved to Tamworth to give Mr Evans and his sibling a better chance of education; his parents bought a farm and his father still contracted to Elders as an agent.

Mr Evans had attended an agricultural secondary school, which he enjoyed because he was very keen on both agriculture and sport.

His father did some contract work for a company in the Northern Territory and took Mr Evans with him when he was about 16. It was there he got a feel for the expanse of the country and gained a love for it.

While at school, he was awarded a scholarship and after leaving, he worked for a pastoral company in northern Queensland.

It was a very progressive company which boxed its own beef, with three different brands selling into 20-odd different countries, and he learned a lot.

After a year, he was unsure which way he was going in the industry. He headed to Canada where he worked out of Banff, in Alberta, taking horseback tours through the Rocky Mountains.

He was the packer with a string of nine mules and it was a great time in his life, as he met a lot of people and saw some great country.

Returning to Australia, he decided to make some money in the mining industry, through earthmoving. While gaining a valuable skill in how to handle machines, he decided it "wasn’t me" and that his love was agriculture.

He returned to Cobar, bought a four-wheel motorbike, put a big bullbar on it and went contract mustering throughout the Northern Territory and Western Australia. He learned how to handle big mobs of cattle and how to work — "probably the biggest thing", he said.

He took on the manager position at Rockhampton Downs aged 23, the second-youngest person on the station, and the property had since undergone a large, infrastructure development programme.

Now, he was moving more into an upper management position in the business and he was excited about that opportunity and the ability to help take it to "the next level".

Like Ms Landmark, he had been reluctant to apply for the Zanda McDonald Award, eventually sending his application through about 11pm the night before applications closed.

It had proven to be a good decision as his involvement in the award had been "game-changing". It had provided contacts not only within the beef industry but throughout the wider agricultural sector.

This was his second visit to New Zealand — he came to Christchurch earlier this year to take part in a Rabobank farm manager’s course — and he was full of praise for Kiwi farming.

In Australia, it was very extensive farming, whereas in New Zealand, it was intensive and farmers were using "every square inch" of their property.

He was keen to adapt that management style in his own operation because he could see the true value of it.

During their visit to farms and stations in New Zealand, both Ms Landmark and Mr Evans had been impressed by how people had opened up to them with all details of their operations, while also treating them "like family".

They had not had a question that had not been answered and Ms Landmark quipped that she went for "the jugular".

The pair had become firm friends through the award process and, when it came to sharing the award, Mr Evans said he "wouldn’t want it any other way".