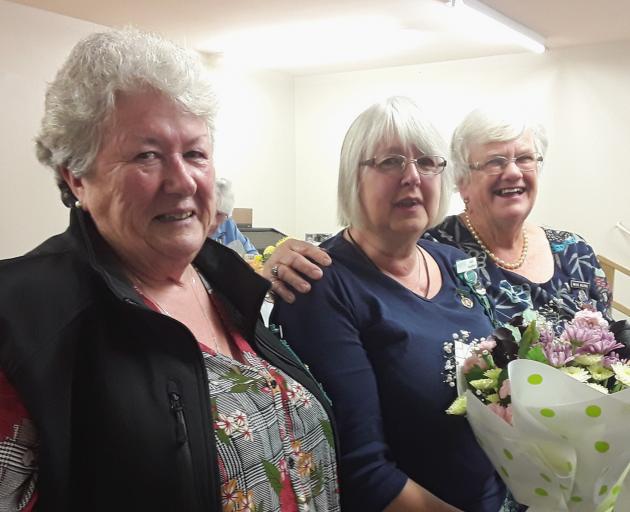 Mrs Vaughan was completely taken aback when presented with the award at the Mid Canterbury Federation of WI’s annual general meeting after a secret nomination of her peers at Lowcliffe WI.

“It just blows you away, it’s not for me, it’s for the organisation. The acknowledgement from your peers, that means so much,” she said.

In nominating Mrs Vaughan, members of Lowcliffe WI said: “She is very proactive member wanting to spread the WI word and fly our banner when possible.

“Lowcliffe WI are very fortunate to have such an inspirational member and have much pleasure in nominating her for the Good Service Badge.”

Mrs Vaughan has been a member of Lowcliffe WI for 10 years but before immigrating to New Zealand she had been a member of the United Kingdom WI for 32 years and been on many WI committees in different aspects.

That service has continued on her arrival to New Zealand.

She has served on the New Zealand Federation of WI’s National Executive Committee and, in the past two years, has been vice-president, remits convener and handcraft and communications committees.

And for the past seven years has been on the Mid Canterbury Federation, holding positions of president, minute secretary and Federation secretary.

She has also been on the Canterbury Belles organising committee for the 2017 National AGM.

As the final speaker at that AGM, her insights and aspirations for the organisation touched so many WI members attending, she got a standing ovation at the end of her speech.

While the nomination was put forward in secrecy, Mrs Vaughan said in hindsight the number of people who asked if she was attending the annual general meeting in February, was probably telling that something was up.

But she suspected nothing and got such a shock by the presentation, made by her friend, and fellow NEC member Kathryn Hopkinson, of North Canterbury WI, who just happened to be visiting, it brought a few tears.

“The recognition by your peers is the biggest honour,” she said.

A woman with many interests, including arts and crafts, quilting and textiles, she is also interested in genealogy and pilates.

She has also represented WI at Civil Defence and Rural Support Trust meetings.