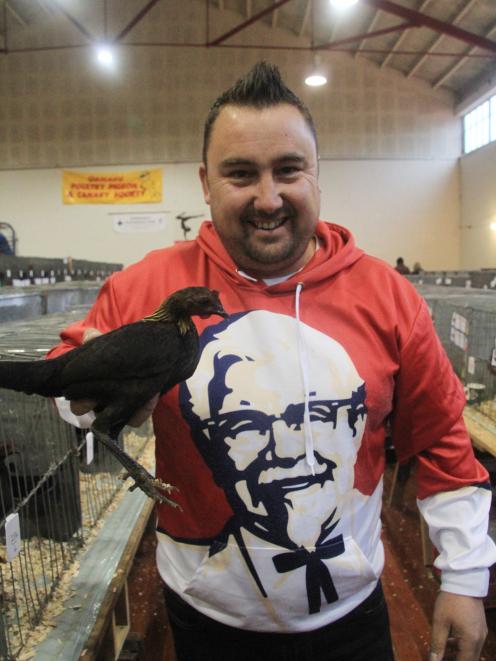 Adam White, of Rangiora, "gave away" a life of harness racing and started to do just that.

Although he still shoes horses for some of the biggest harness racing stables in Canterbury, his 4ha block is home to ponies, racehorses and chooks - heaps of them.

With his son Flynn (11) as his right-hand man, the one-time harness racing driver is at the forefront of a resurgence in modern game bantams at poultry shows in the South Island.

On Friday and Saturday, of the 800 birds at the 135th annual Oamaru Poultry, Pigeon and Canary Society show at the Drill Hall in Itchen St, 130 Old English bantams and 50 modern game bantams were primped for the judges.

Mr White only began breeding the birds (bred for public cockfighting in 1840s England) after inheriting two Old English game bantams, which he "took a shine to", and took them to a Christchurch Poultry Bantam and Pigeon Club show, where they placed second.

His competitive nature then took over and he was hooked.

He bought 10 breeding pairs and started to breed as many birds as he could, keeping only the best.

He now had up to 400 breeding birds, he said. And for each of the 15 different colour varieties, he initially kept 50 or 60 of the best chickens.

Watching them as they grew, by Christmas he would have narrowed those down to the top 20 birds of each, Mr White said.

Oamaru Poultry, Pigeon and Canary Society president Clint O'Brien said Mr White was at the forefront of a resurgence in numbers of modern game bantams at shows, because though the birds had "always been here", with Mr White bringing quality birds out to shows other breeders had "come out of the woodwork".

"There just wasn't anybody that was passionate about them," Mr O'Brien said.

For the first time in its history the Oamaru show had a class for geese this year. Four were entered, a number that was expected to grow year on year.