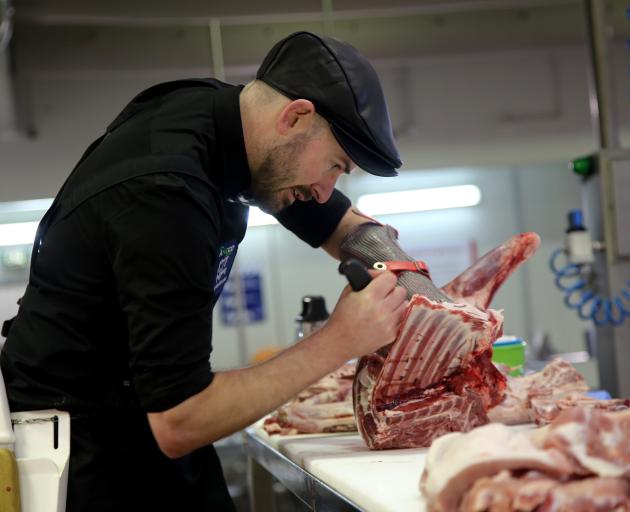 Butcher Isaac Webster, of Dunedin, practises his plan to add value to meat ahead of competing in the World Champion Butcher Apprentice Competition, in California, in September this year. PHOTO: SUPPLIED
Everything’s bigger in the United States but a Dunedin butcher is confident he will be a cut above the rest as he prepares to compete on the world stage.

Isaac Webster (31) will go head-to-head with counterparts from 13 countries in the World Champion Butcher Apprentice Competition in California on September 2.

For the competition, butchers get 150 minutes to break down and add value to four types of meat — half a lamb, a loin of pork with the belly attached, a rump of beef and two chickens.

"We know exactly what we’ve got ahead of us."

The meat carcasses being supplied for the competition would be bigger than what butchers in New Zealand usually worked on.

"Over in the States — as with most things — everything’s bigger."

In the competition, the pig carcasses would be 30kg heavier than usually encountered in New Zealand, lambs about 10kg heavier and the chickens would weigh about 2kg.

Despite many of the butchers he would be competing against having more experience working with bigger carcasses, he doubted it would give them any advantage.

"I’m really confident in my ability."

The forewarning of colossal carcasses would ensure the butchering of a bigger beast would not be a burden.

"By knowing about it and preparing for it, it’ll be fine."

The butchers must display their creations on a table for judging.

"I focus on one thing at a time — I don’t focus on the end result — I focus on what is in front of me at the time, and for me that works really well."

As the carcasses were bigger, he expected there to be more meat trim to be available to create products, such as burger patties and koftas.

He had made a competition plan and had practised.

The focus was now on practising to make each product perfectly before he flies out in late August.

He thanked his employers at New World Gardens, Craig and Julie Broderick, for supporting him, including giving him time and ingredients for practise.

He had already pre-ordered the ingredients to add value to the meat on competition day and arranged a way to have them waiting in competition venue, the Golden 1 Centre, Sacramento, California.

He would be the only southerner travelling among a squad of butchers competing in other categories including a team of New Zealand’s top butchers, known as the Sharp Blacks.

Sharp Blacks captain Riki Kerekere had given him feedback on his plan.

"That was really helpful."

Due to Covid-19 disruptions, he would compete in the apprentice category despite qualifying as a butcher in December last year.

The annual competition was last held in Ireland in 2018, due to ongoing Covid-19 disruptions.

A record number of entrants would be competing this year, he said.