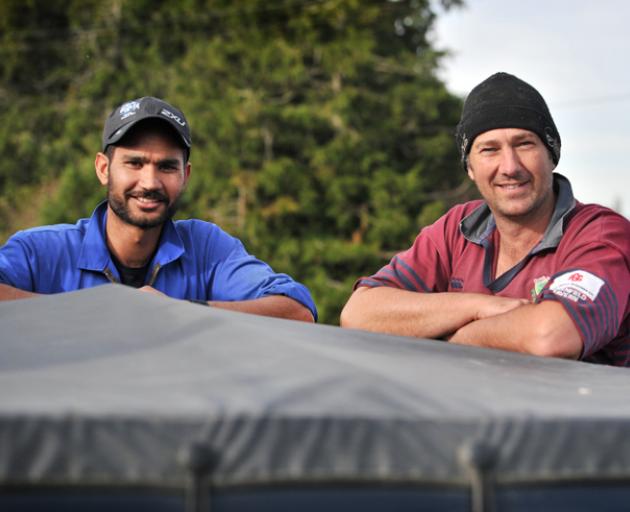 And groups are calling on the Government to use its new visa flexibility powers to address a looming staff shortage, following the impact of Covid-19.

“If you have migrant workers on your farm that suit the system, it means during an already difficult time it would offer some assurance,” Mr Korteweg said.

And it could also offer certainty, during an uncertain time, to workers who may not want to leave, not knowing what they would go home to during the pandemic.

Mr Korteweg said interviewing people ahead of the new season posed challenges, as the option of hiring people from overseas had become nearly non-existent.

He believed it could be an opportunity for Kiwis to “take note” of what is deemed essential.

He hoped more New Zealanders would follow a pathway into the industry.

About a year ago, Mr Chander was granted a five-year work visa, which meant he and his wife, Pawan Chander, who is a nurse, could stay in New Zealand.

Mr Adam said he ‘‘could not have done the past eight years without him’’.

Mr Adam said he had to advertise Mr Chander’s job during the six years he was waiting to see if his visa would be accepted. It had been mainly migrants who had shown interest.

“New Zealanders could do it but if seems they have not wanted to as much [as] in the past.’’

Dairy NZ said at the end of September about 2500 visas were due to expire for staff currently working on dairy farms.

Many of those people were based in Southland and Otago.

Dairy NZ chief executive Tim Mackle said it was estimated even if all migrant dairy workers currently in New Zealand stayed, there could be a shortfall of up to 1000 employees for the coming season.

‘‘This is a difficult situation for farmers to face and particularly when our migrant teams are so valued.’’

Dr Mackle said migrant staff would also be important in supporting dairy to play its part in the recovery of New Zealand's economy.

And extensions would ensure time for Kiwis to get on board and ‘‘up to speed’’.

Federated Farmers was hopeful the Government would use its powers under the Immigration (Covid-19 Response) Amendment Bill, introduced last week, to grant visa extensions to migrant farm workers.

Its employment spokesman Chris Lewis said in the face of the pandemic the coalition Government had ‘‘proved itself nimble and sensible’’ and allowed the primary sector to get on with producing food and earning export revenue.

And while the sector would continue to recruit more Kiwis, including people who had lost their jobs in tourism and other industries, migrant workers were vital to get farmers through the busiest part of the dairying calendar and to help train new staff, he said.