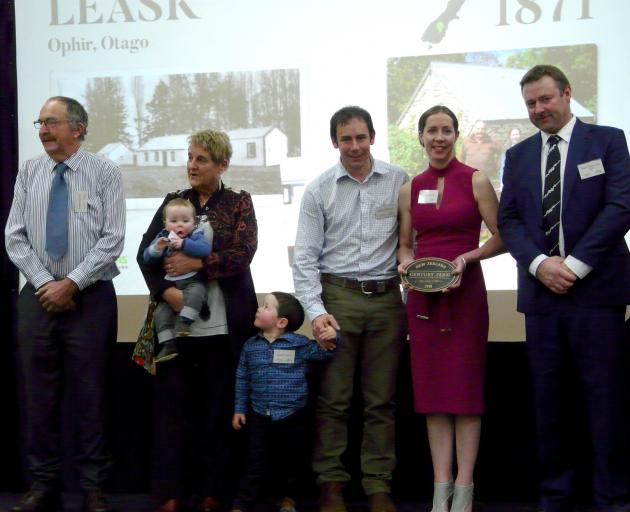 Celebrating 148 years on the same farm at the Century Farm Awards in Lawrence on Saturday night are the Leask family, of Ophir, (from left) Sam and Irene Leask, grandsons Hamish (8 months) and Daniel Currie (3)and Richard and Sarah Currie. Photos: RICHARD DAVISON
Farming families from across the country were honoured for their longstanding "grit and determination" at an award ceremony in Lawrence on Saturday night.

The praise came from Lawrence list MP Mark Patterson as he deputised for a fogbound Minister of Agriculture Damien O'Connor as guest of honour at the 13th annual Century Farm Awards in the town.

The awards, which mark families farming the same land continuously for a century or more, welcomed their second-highest number of recipients this year, at seven sesquicentennial (150 years) and 33 centennial nominees.

In his opening speech, Mr Patterson talked about the "dedication, hard work and resilience" of farmers in support of New Zealand's continued growth, and the importance of paying homage to families' predecessor pioneers. 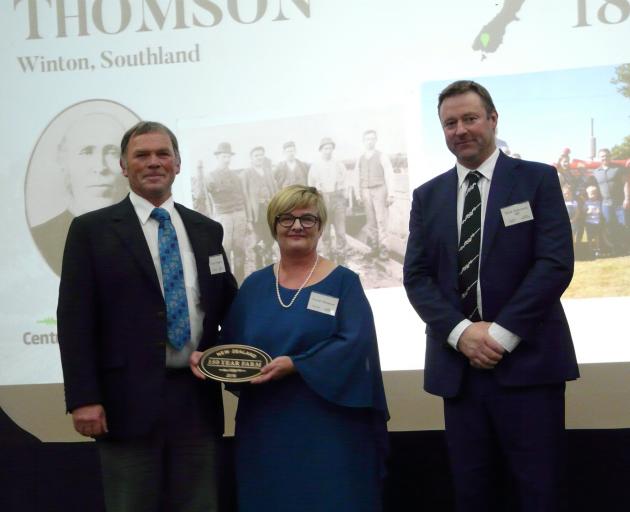 The Thomson family, represented at the Century Farm Awards by fifth-generation descendants Peter and Norah Thomson, has farmed in Winton since 1868.
Century Farms chairwoman Karen Roughan said organisers were delighted with the farming community's continued interest.

"This is the most we've had since the inaugural year, and it's credit to [event founder] Russell Brown that it continues to put Lawrence on the map in the way it does."

Mr Brown had been inspired to start the awards following a trip to the United States, where a similar event is held.

"In part, he wanted it to promote Lawrence, and it's helped do that. Word of mouth seems to be spreading across the country, so we feel it's here to stay."

Accepting the award on behalf of his family was Ophir sheep farmer Sam Leask.

Mr Leask, a fourth-generation farmer on his family farm, Pomona (1871), said it was important for the efforts of New Zealand's pioneer farmers to be recognised.

"Still today we farm on the fringe where we are in the Ophir hill country. But the one thing that held true then and now is that it's reliably dry.

"You're in the lap of the gods, but you wouldn't go anywhere else."