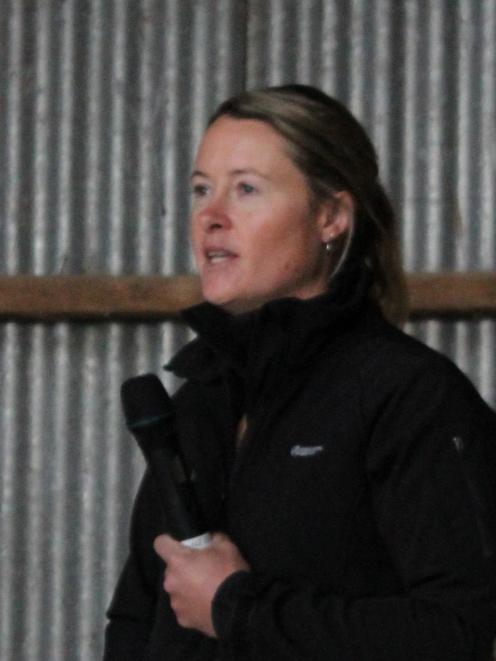 Southland-Otago Dairy Manager of the Year Jaime McCrostie talks at the recent regional field day at the Vallelys' property, near Gore, about her journey in the dairy sector.PHOTO: NICOLE SHARP
Jaime McCrostie never thought she would end up dairy farming.

She grew up on a sheep farm and it was her neighbour who taught her how to milk cows.

She has travelled all over the world and worked in a range of industries, but always seems to come back to the dairy industry.

Winner of the Southland-Otago Dairy Manager of the Year title, Miss McCrostie is managing the AB Lime dairy farm near Winton.

The 374ha effective property was converted four years ago, and originally had sharemilkers.

Last year, Miss McCrostie was employed as a manager on the 896-cow farm and is now in charge of making sure everything runs smoothly.

The farm operates an all grass wintering system, and has top notch infrastructure, with all the bells and whistles, she said.

Miss McCrostie believed her biggest asset was her organisational skills, as she was a person who liked routines.

She was lucky to have such great support from her boss Steve Smith, who is the general manager of AB Lime.

The staff on farm had plenty of training, and as the farm was a lime quarry, they were trained in anything and everything farm related, she said.

``AB Lime is passionate about training. You name it, we get trained in it.''

Looking forward, her goals were to take on an operational manager sort of role, and being employed by AB Lime, there was the opportunity to step up, in time, she said.

She wanted to build up her equity, as her goal was to go in to an equity partnership in time.

That way, she could have the best of both worlds, as she wanted to be involved in the operational management and leadership on farm, she said.

``I want to get the farm to a stage it almost comes with a bible.''

For her power play round in the awards, Miss McCrostie chose health and safety.

Because the AB Lime farm is a working quarry, there was a lot required about the machinery on farm.

``It's more the attitude and culture, that we buy into it,'' she said.

Miss McCrostie had to change her own attitude towards health and safety, and like many others, now operates on the basis of getting everyone home safe at the end of the day.

Weekly health and safety meetings went over any incidents, new hazards and how to control them, as well as a hypothetical scenario and how the farm team would deal with it.

The farm ran a relatively low input system, so there was ways they could increase the milk solids without too many changes, Miss McCrostie said.