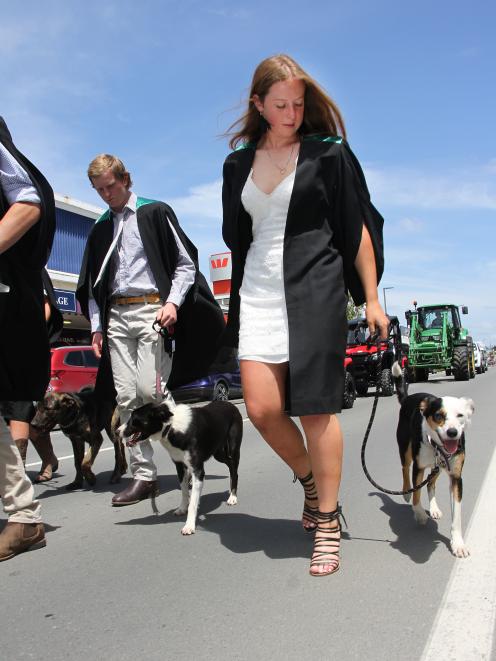 Happy day...McKenzie Bird walks with Jane her dog in the Telford graduation parade in Balclutha last year after gaining her certificate in agriculture. She is now studying for her diploma. PHOTO: JOHN COSGROVE
Telford student Mckenzie Bird is passionate about deer.

In particular, the teenager enjoys velvet production and working with stags as they are ‘‘big chilled fellas’’.

‘‘Getting out with them is an exciting place to be and they trust you, which is pretty good.

‘‘For me there is an adrenaline rush with them and I like them, they are pretty placid.

‘‘The perception of deer is they are scary but they are not, although it is important to learn the skills to handle them properly.’’

Now 18, once Mckenzie completes her studies at Telford, near Balclutha, she hopes to work either on a mixed stock farm as a shepherd, as she has her own dogs, or on a property with a deer focus.

She comes from a non-farming background in Kaiapoi, where her father is a builder and her mother is a preschool teacher.

Her first experience on a farm was at her great-uncle and aunt’s property in Ashburton.

After leaving school, she worked as a rousie and found sheep ‘‘pretty cool’’.

Mckenzie decided to go to Telford after attending a taster camp.

She completed her certificate in agriculture, and is studying for her diploma in agriculture as she realised the additional qualification would get her a better job in the future.

As part of that, she works for Richard Currie on his Black Forest Park deer operation at Clinton during the holidays and weekends.

‘‘I had no deer experience before I went to Telford. I didn’t know anything about them, and then Telford provided opportunities for work experience.

‘‘Richard is a pretty good boss, giving me plenty of opportunities to work with deer, and that is awesome as it makes me feel like I am doing well and I feel like I am growing within the industry.’’

She and three other students toured various deer farms and stations as well as other deer operations in and around Canterbury.

‘‘Each night we had a dinner with local deer farmers and they would share their stories.’’

Mr Currie said Mckenzie approached them, hoping to gain some work experience after attending the initiative.

‘‘I was impressed with her passion for deer and enthusiasm for work so I offered her a job over the holidays as well.

‘‘Mckenzie has quickly gone from having little to no knowledge of deer farming to being eagerly involved and confidently handling animals.

‘‘Attracting new people to deer farming often can be difficult, I believe this is largely to it being unknown and also due to commonly held misconceptions about handling deer.

‘‘Programmes such as the future deer farmers’ experience and on farm work experience and exposure to deer during tertiary courses are vital for the sustainability and growth of the deer farming industry,’’he said.

As it was hard for someone to find work in the deer sector without the background or experience, Mckenzie advised anyone interested to talk to local deer farmers.

‘‘Go for it and try as many connections in the industry as you can.

‘‘For me, having deer experience on my CV is quite a qualification to have.’’